Australian of the Year, Rosie Batty, has created an app called iMatter to curb domestic violence against women and young adults.

Can you recognise the signs of domestic violence? Would you be able to determine whether your partner had shifted from supportive to manipulative? Are you aware of the signs and do you know how to spot them?

Love is blind, as they say, and often the optimism that comes with a relationship overshadows the signs that it has entered dangerous territory. First come the excuses, the exceptions to the rules, then the reasoning that behind the control is really just someone who has your best interests at heart.

Australian of the Year, Rosie Batty, knows all too well how domestic violence can turn to tragedy, and to help other people recognise and prevent domestic violence, she has created an app with Doncare called iMatter. The app’s aim is to teach young people, especially women between the ages of 16 and 25, how to recognise unhealthy relationship patterns and opt for healthy relationship dynamics instead.

The thing is, girls and women often think that controlling behaviour and jealousy are just signs that a partner cares, that they’re just being protective. Doncare director of clinical services, Carmel O’Brien, says people just aren’t educated enough about what a toxic relationship really looks and feels like. 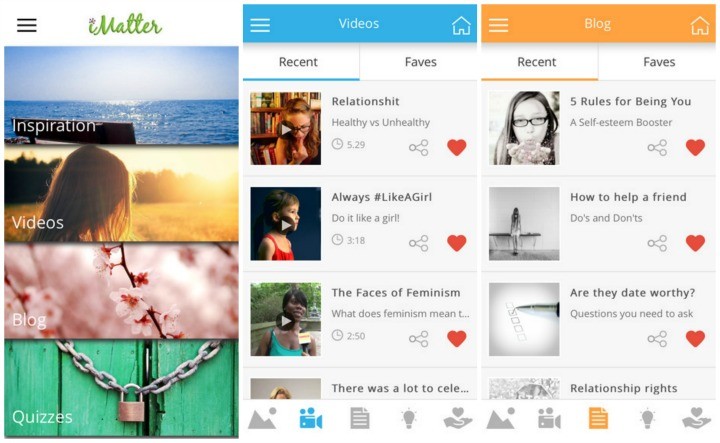 “[Girls told us] we hear about healthy relationships in all sorts of useful ways,” O’Brien said. “But nobody tells us about that fine line between abusive and controlling behaviour.”

And that’s exactly what the app aims to do through a series of videos, images, quizzes and articles, because an alarming amount of women don’t even realise they’re victims.

According to the ABC, a recent study found 22 per cent of girls under the age of 20 had been in a violent relationship, a worrying number.

But for Batty, the advice is clear. “If [the relationship] doesn’t feel right, get out of it. Get out,” she said. “It never gets better. And I think that’s the unfortunate thing about relationships. We rarely do end them when we should.”

What do you think about the iMatter app? Can it make a real difference? Share your thoughts and opinions in the comments section below.