Happily ever after exists, but if you think it’s something that just happens rather than something that’s fought for, then you might be in for a shock. We talk to some couples who, despite adversity and difficult times, have found their happy ending and have stayed together through it all. 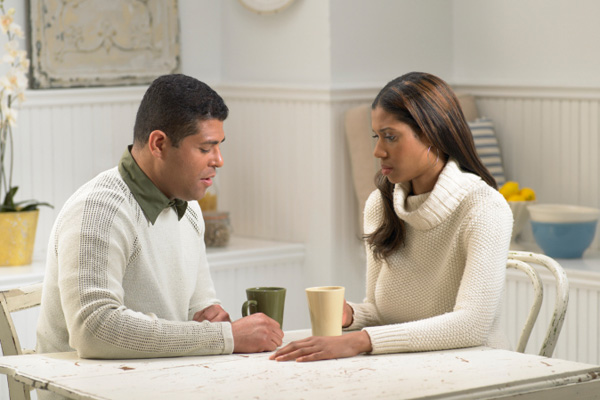 Relationships are based on mutual trust and respect, so what happens when that trust is replaced with doubt and the respect with disdain?

According to a survey conducted by the National Fatherhood Initiative, 73 per cent of people said a lack of commitment was the main reason for their divorce. But what was also found was that two-thirds of people surveyed wished they had tried harder to save their marriage.

We spoke to three women about what it means to work hard to keep their marriage and their happy endings.

I never thought I’d ever forgive someone if they cheated on me. But that’s exactly what I did after I found out my husband had had an affair. I think if people could see us now, not knowing what we’ve gone through, they’d never guess we were on the brink of a divorce at one point. I was close to leaving; I wanted a quick fix to the pain I felt following what I’d found out. I wanted to hate him and walk away. I wanted never to speak to or see him again. But something stopped me, something invited me to forgive him. I — we — have fought really hard to stay together despite the trust issues, the deceit, the lies and the doubt. We didn’t speak to each other for a time; we couldn’t even look at each other and, for a while, we lived apart and I watched our marriage fall apart. Our family and friends didn’t know; we didn’t tell them what had happened until years later, until the dust had settled. But something kept me hanging on — our memories, our story, our love. Marriage is forever; you fight for love, no matter what. That’s what I think anyway. And somewhere along the line, it dawned on me: We’re so quick to opt out of relationships once things go bad, but it’s when things go wrong that we can truly show our partner how much we love and support them. So, that’s what I did. Even when they’ve got poor judgement, even when they go do the wrong thing, it’s in those times we choose who we want our happy ever after to be with. And for me, my happy ever after has always been, and will always be, with him.

What to do: Peggy Vaughan, author of The Monogamy Myth, says 60 per cent of husbands and 40 per cent of wives will have an affair at some point in their relationship. But less than 10 per cent of those who’ve had affairs leave their partners for their lovers. “Most of us expect monogamy to be a normal part of marriage (or any committed relationship),” Vaughan says in her book, revealing she found out her husband had had an affair for seven years. “It’s unreasonable to think affairs are due only to the failures and shortcomings of individual husbands or wives,” she continues, explaining relationships, especially those between husband and wife, are not so black and white. Take note of the following if you’ve experienced infidelity in your marriage:

Relationship review: How to asses your relationship in the new year >>

I vowed never to talk to the man of my dreams ever again. It was just too painful. My partner and I had met through work — we were both doctors at a local hospital. We met and fell in love but our work led us to living in very different parts of the world. He was posted to London while I stayed in Australia. Admittedly, we thought we wouldn’t be able to cope with the distance, and for a while there, we didn’t. Eventually we went on a break. Months had passed and I called him for his birthday. It was completely out of the blue. I don’t know why I did it. I still loved him, I guess. I still believed there was hope for our relationship, and I realised during the call that he did, too. That same year, we spent New Year’s Eve together, via Skype. He sent me a playlist, so we’d be listening to the same music; he told me to buy certain foods, so we’d be sharing the same meal together; it was the most romantic thing I’d ever experienced. And in that moment, I realised that, sure, long distance is not easy, it’s really very hard. But I knew, in the end, we’d be together eventually and that gave me enough strength to keep moving forward with him.

Bring it back: 10 Tips to bring the spark back into your long-term relationship >>

The single mother and business owner

When I first met Aaron, I was a single mum. I was working crazy-long hours, trying to get a new business off the ground, studying part-time and struggling financially. Aaron came into my life and took on the role as dad, helped take on the home duties and helped me in my business, even supporting our family financially — all while he maintained a full-time job. Coming from never having had a serious relationship, or any other serious responsibilities to taking care of a family was the other extreme for him and I really feel like he sacrificed so much for us to be together. He gave himself so selflessly to help. We’ve had many very challenging moments, a lot of added stress from a high-pressure environment over the years and I have also had to change a lot — going from being a workaholic single mum to having a more balanced lifestyle and spending more time with my family. Three years on and we’re happily married with our third child on the way. Our once-struggling business is now doing well — so much so that Aaron is able to be the stay-at-home dad. Aaron always believed in my abilities and always supported me and the family. The kids now call him dad and I’ve never seen them happier than they are now, in such a loving and stable family environment. We’ve had some challenging times, but they’ve all been worth it to see the happiness in my children and to have such a supportive husband.

What to do: Author of Synchronised Breathing Tara Ellison says dating again as a single mother comes with new responsibilities. “Dating as a mother demands a new level of maturity. The margin for error you once enjoyed pre-motherhood has radically diminished, and you now have one or more little people depending on you not to screw it up again,” she says. “Blending a family becomes a complex series of negotiations that requires compassion, understanding and, more than anything, patience.”

How to make your relationship last in the face of adversity

What are you entitled to when a de facto relationship breaks down?
Boost your relationships by learning to love YOU
How to handle a new relationship on social media