Dating or being married to an alpha male can have its disadvantages. While the self-assured attitude can be appealing at times, it can be frustrating trying to get a stubborn man to do something he doesn’t want to do. Girls, if you need help finding devious ways to manipulate your man, you have come to the right place. 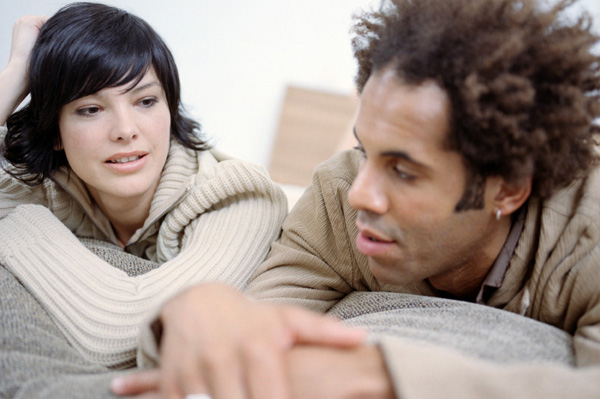 Forget crying, it’s been done to death and generally, ladies, using tears as a weapon doesn’t fall into the category of sneaky. Cry often enough and he’ll soon become immune to your snivelling. In fact, in 2011, Time magazine reported scientific findings that a woman crying can turn men off and lower their testosterone levels.

Using reverse psychology is so easy, it should be illegal. It works like a dream on dominant males — those fiercely competitive guys who would rather walk on broken glass than be proven wrong. All you need to do is tell your partner he can’t do something and he’ll be chomping at the bit to show you you’re wrong.

Ali, 41, a mother of two shares her experience using reverse psychology on her partner:

My husband is really lazy when it comes to spending time with the kids. He’d rather watch telly or have a round of golf with his mates, or go to the pub. He works hard, so when he’s at home, he likes to relax, but sometimes I think it would just be nice if I could have a night off, shopping or at the movies with girlfriends. He’s always got some excuse about why he can’t or shouldn’t watch the boys. I’d read a bit about reverse psychology and I wasn’t convinced it would work; I was wrong. I casually mentioned I’d been asked to go out with a friend, but I had decided against it because I didn’t think he could cope looking after the boys, doing dinner, baths, getting them to bed. Then I added in the boys had said they didn’t want me to go because Daddy wasn’t as much fun as Mummy. Okay, it was a white lie, but it had the desired effect. He insisted I go and was on a mission to prove I was nowhere near as fun as he was.

Since we got married, my husband has stacked on the beef. It’s no surprise because he’s like a human garbage compactor. “Don’t throw that out, it’s still good, I’ll eat it!” To be honest, we’ve both put on around 15 kilos in the last year. I tried to get him to go out walking with me or join a gym, something we could do together, but he just kept telling me we’d do it next week. I decided to join the gym without him and got a personal trainer. Three months later, he was still all talk and no action. I told him I completely understood if he didn’t want to sign up because I felt he wouldn’t stick with it and it would be a waste of money. I also added that he’d be lucky if he could press the kind of weights I was lifting and there were so many hot gym bunnies wearing next to nothing that I would feel jealous if he was to check them out. He signed up the following day. Too easy!

How to argue without ruining your relationship >>

The art of negotiation

You can get anything you want for a price. Bargaining doesn’t have to be a win-lose situation. Find out what your partner wants so you can use this as your bargaining chip — and be prepared to compromise. Decide on the optimal outcome you’d like to achieve, but have in mind what you’d be prepared to settle for. Prepare a mental list of reasons why your suggestions are beneficial for your partner. It sounds easy, but how do you put the art of negotiation into practice?

We’ve just bought a house we’re doing up. It’s been a mission because we can’t really agree on anything. I decided the best way to get what I want was to find out what he really wanted and use that to influence his decision. One example I can think of is I told him I wanted an office, a sun room and a dedicated sewing room. He thought all that was a big waste of space and he wanted a games room. He’s a huge motor sport fan so I dangled the, “I’ll let you go to the V8s at Bathurst with your mates even though we can’t afford it, and not complain if you let me have a sewing room,” carrot and forgo the office and sun room. I pointed out I wouldn’t take up any room in his man’s shed and there would still be room for a games room. He was sold. He thought he was getting the deal of the century. Funny thing was I never really wanted an office and a sun room in the first place.”

3 things to ignore in your marriage >>

The trouble with stubborn alpha males is that sometimes reverse psychology doesn’t always work. This is where you need to plant seeds. It is a long, tedious process and can sometimes take up to a decade before your partner takes action, but when he does, he thinks it’s because he’s a genius and thought up the idea in the first place. It takes patience, but the results will be well worth it. Let us show you how it works in real life.

I love to travel. There’s nothing like exploring new places, seeing new things, meeting new people. My husband is happy with the occasional holiday on the Gold Coast. His favourite saying is, “You need to see your own backyard first.” Ever since I was little I’ve wanted to go to the U.S. When I’ve suggested it previously, it was always, “It’s too far, it’s too expensive, the Gold Coast theme parks are just as good!”

It’s taken eight years of sowing seeds, but we’re finally going — the tickets are booked and paid for. I started out casually mentioning prices of return flights to Los Angeles every time we passed a travel agent. I’d watch YouTube clips of amusement park rides and it would pique his curiosity. I’d respond by saying, “You wouldn’t be interested.” I showed him photos of Facebook friends who had been to Disneyland, or flying business class, and leave travel brochures lying around. About two years ago, out of the blue, as we were walking past a travel agent, he announced ,”Why don’t we go in and see how much it would cost us to go to Los Angeles?” like I’d never mentioned it before. It was out of our budget at the time, but he suggested starting a saving fund for it. At first, it was just going to be a week and just to Anaheim, but as I continued to water the seeds I’d already planted, now we’re going for 24 nights and it includes San Diego and Las Vegas. Of course, it’s all been his idea.

Relationship review: How to assess your relationships
20 Ways to make the first move
What you are entitled to when a de facto relationship breaks down