It’s no secret that organic food is better for us. If you’re thinking about making the switch this year, here’s why it’s a good idea — and how to do it without breaking the bank. 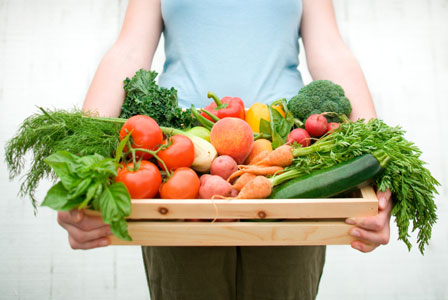 What does “organic” mean, exactly?

Once upon a time, organic food was only found in health food stores but these days, it’s more than just a trend. It’s readily available at most supermarkets — and now that we know so much more about its benefits, it’s not hard to figure out why. The buzzword “organic” refers to the way farmers grow and process products such as fruits, vegetables, dairy and meat. These farmers don’t use conventional methods to fertilise their stock — instead, they have a more natural approach. Organic food isn’t sprayed with nasties like pesticides, and its growth isn’t helped by injections of hormones. (It’s gross to think about some of the chemicals we put in our mouths, isn’t it?) In other words, it’s a whole lot better for the environment as well as for your health.

In Australia, around four in 10 people buy organic food. But is it worth the hefty price tag? If you care about what you put into your body, the answer is yes. But just in case you need more convincing, here are more reasons why you should consider making the change.

By choosing organic food, you’ll avoid eating the cocktail of chemicals, pesticides and additives found in normal farm produce. Fruits and vegetables, for example, are sprayed with insecticide, herbicide and fungicide anywhere from two to 10 times before they hit our shelves. Some are even genetically modified. Why would you want these kinds of toxins anywhere near your body, let alone in it? In comparison, organic produce is grown in a more natural way and you can eat it knowing that it has no nasties. It’s also a much better choice for young children, who have sensitive immune systems as it is without ingesting any unnecessary chemicals.

We all know about eating five pieces of fruit and veg each day, but did you know that organic food can increase your intake of vitamins and minerals by 30 per cent? The nutritional value of organic produce is impressive. It naturally has higher levels of vitamin C, calcium, magnesium and iron as well as a bunch of antioxidants. If you’re low in any of these, try going organic before turning to supplements and see if you feel the difference.

Many chefs use organic foods not only because they are fresher and well-cared for during production, but because they taste better. The benefits of organic farming come down to the quality of the soil, which is packed with nutrients. This soil then feeds plants with tons of minerals, which in turn infuses them with flavour. Without all those chemicals and pesticides creating a barrier, it makes sense that organic food tickles the tastebuds more.

Good for the planet

While organic farming has tons of health benefits, it also seriously helps the environment. The methods used by our trusty organic farmers work to prevent soil erosion, conserve water, save energy and reduce pollution. They also produce less waste and carbon dioxide, which is the gas that global warming experts can’t stop warning us about. All in all, organic farms treat their land and wildlife with a little more respect — if that isn’t a feel-good reason to make the switch, we don’t know what is.

How to make the switch

Switching to organic foods can take some getting used to, but here’s the good news: Even just swapping a few of your food choices around can have a huge impact. Easing into it will also give you time to figure out how organic food fits in your budget and how you move around the supermarket. (We find that chanting “I’m doing this for my health” in your head while you’re trying to find the organic aisle among crowds of shoppers helps).

Making the switch to organic foods can be expensive, but with a little bit of planning, you can do it without breaking the bank. Instead of heading to your supermarket, try shopping at a co-op or farmers markets instead. If you go towards the end of the day, a lot of the organic food is discounted. Alternatively, consider buying in bulk or starting your own little vegie garden!

When you first decide to go organic, the key is to be strategic with your purchases. Start with buying the organic produce that will benefit you the most. As a general rule, fruit and veg with thin skins (like apples and potatoes) have the highest levels of pesticides, so go for the organic versions of these. Foods with peels, like bananas, oranges, and onions, have less chemicals so they can wait. You’ll also be doing yourself a favour if you buy organic milk and peanut butter.

More about a healthy lifestyle