Between work parties, family lunches, catch ups with the girls and New Year’s Eve blowouts, the holidays can be filled with more booze and temptation than you can handle. 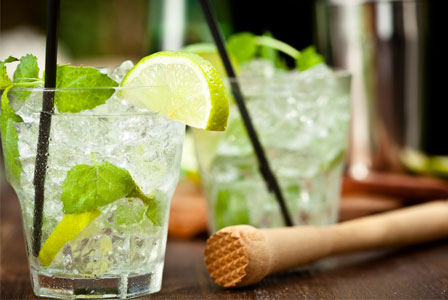 To sip on something sweet without feeling guilty, choose one of these low-cal cocktails.

Most cocktails are a one-way ticket to calorie city, but luckily, with a few tweaks, they can be made a little healthier. If you want to sip away on a pretty-looking drink without wreaking havoc on your waistline, skip the sugary and creamy cocktails (like pina coladas and margaritas) and go for one of our favourite low-calorie options instead. They taste just as good and they don’t come with a side of guilt. But before you run off and set up a bar tab, don’t forget that the same alcohol rules apply: Sip slowly (try ditching the straw), avoid refills and huge glasses and have a glass of water in between each drink.

If you’re sipping a little more than usual, make a gin and tonic your go-to drink. It’s sophisticated, it’s tasty and if it’s made right (one part gin and three parts tonic), it will only set you back 103 calories. For the more health-conscious among us, add a squeeze of lime — it will line your stomach and kick start your digestive system.

If you’re a vodka-cranberry kind of girl, we bet that this will become your new go-to drink. The sea breeze is made up of a shot of vodka, a dash of cranberry juice and a bit of grapefruit juice. Not only does the grapefruit add a bit of punch to the recipe, but it also helps your body neutralise the effects of drinking alcohol. Just in case you’re still not convinced, this cocktail will only set you back a measly 180 calories.

With a few little alterations, the delicious and refreshing mojito is one of the best cocktails you can have. The mint, lime and soda water hardly have any calories, and the shot of rum rounds up to about 100 calories. Now, here’s where the tweak comes in. Instead of letting your bartender load up the drink with the usual four tablespoons of sugar, ask to cut it down to one or, even better, go for a dash of syrup — it’s only 40 calories.

It’s the healthy twist on what is a classic man’s drink: the rum and Coke. Instead of ordinary Coke, ask for Diet Coke, which has far fewer calories and a hell of a lot less sugar. If you get bored after one of these drinks, choose white or spiced rum for a burst of extra flavour. This elegant cocktail clocks in at less than 200 calories a glass, and really, it doesn’t get much “healthier” than that.

Before we delve into the benefits of this cocktail, we should probably warn you that it’s not for those ladies who have a sweet tooth. In fact, this drink is so low on sugar that it can hardly be classified as a cocktail, but it has more than enough other flavour to make up for it. As the name suggests, this concotion is made up of club soda, a shot of tequila and a squeeze of lime. It’s as Mexican as a margarita, but only contains 100 calories. Spend 10 minutes on the treadmill and it’s gone.

While cosmopolitans are a diet disaster, that doesn’t mean that all martinis are a no-go. In fact, with a little experimenting, you can ditch a lot of the sugar in Carrie’s famous drink. If you’re craving something sweet yet not sinful, try a sour apple martini. It’s made with a shot of vodka, a dash of sour mix and a touch of sour apple liquer. And it’s got half the calories of a cosmo: just 160 in total.

If you’re a wine-lover at heart, this drink is sure to please your palate. In most bars, a Champagne cocktail is simply a glass of bubbly with a dash of flavoured syrup, usually strawberry or raspberry. Champagne drinkers love the contrast between the tangy, sparkling wine and the fruity sweetness. As a bonus, this cocktail is just over 100 calories, 15–20 less than the average glass of vino. Best of all, Champagne is always served in narrow glasses, which means you’re less likely to go crazy with your portion sizes (yes, they do apply to drinks).