It’s a new year, so you know what that means: It’s time to shake up your workout routine. Here are the classes and moves that are set to dominate the fitness world in 2013 – you might be surprised! 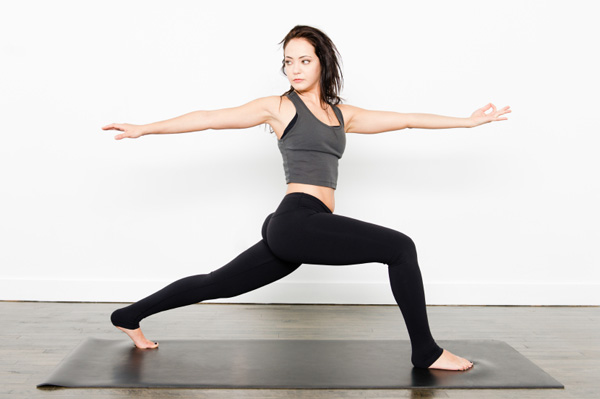 Everyone jumps on board the health wagon after the New Year’s Eve hangover, but many quickly fall off from sheer boredom. Well, the workouts that are predicted to take off in 2013 are anything but boring. If you’re ready to throw some new workouts into your gym mix, or just be super trendy while you sweat it out, give one of these routines a go. And remember, you can’t diss it till you try it!

“Combo” classes have been slowly edging their way into gyms for a couple of years now, but fitness experts are predicting that they will be the new “it” thing in 2013. Perhaps it’s because they kill two birds with one stone, thus saving time, or maybe people just like the challenge. Anyway, there are tons of fusion classes on the horizon, including Piloxing, aerial yoga, and Core Fusion Barre. By mixing workouts that require different skills and disciplines — Pilates and boxing couldn’t be more opposite — they work parts of your body in unique ways. Plus, they’re fun, so if you want to change up a stale fitness routine, why not give one a go?

If you’re the queen of planks and ab curls, guess what: You’re now a trendsetter. While weight machines and props like dumbbells can build your strength, the fact is, your body is a super efficient machine all on its own. In other words, you don’t need to use all that fancy equipment — your own body weight is enough. What’s more, because your body is moving naturally, these exercises can relieve pressure on your joints and reduce the risk of injury. Many group fitness classes already incorporate bodyweight moves, but in light of this trend, expect your trainer to rely less and less on the kettlebells.

Training in smaller groups is the best of both worlds. It’s cheaper (and much less intimidating) than one-on-one sessions, and instead of running around trying to spot 20 people, your trainer can actually pay you more attention. If you’ve trained in a group before, you’ll know that working out with a tight-knit bunch of people can motivate you in ways that personal and large group training can’t. There’s something about the camaraderie and healthy competition that can really spur you on — and the social side isn’t too bad either. Just try to join a group that has people who are more or less at your own fitness level.

With their pumping music, high-energy routines, and non-stop movement, dance-inspired classes are calorie-blasting buckets of fun. They are also a major cardio workout — but most of the time you’ll be having such a great time that you won’t even realise what an insanely good workout you’re getting. (But just in case you care, a Zumba class burns a whopping 350 calories). Plus, by engaging your whole body, dance workouts target muscles that more traditional workouts miss. If you like fast-paced classes, try Zumba or belly dancing; if you’re all about technique, give Pure Barre a go.

Once the domain of the army and muscly men, boot camps are one of the fastest growing workouts around the world. And there’s a simple reason for their popularity: They really whip you into shape. In fact, boot camp-style classes can torch over 600 calories an hour! There are tons of different options available, from CrossFit (a circuit-type class that will really get your heart rate up) to Original Boot Camp (an intense workout that’s modelled on the army’s version) and classes that are just for ladies (no overly buff men allowed). No matter what kind of class you sign up for, expect to do calorie-blasting moves like push-ups, planks and squats, as well as plenty of running and boxing.

Are you strapped for time? Do you find the gym so boring you want to cry? Well, you’re the perfect candidate for high-intensity interval training, or as the savvy fitness freaks call it, “HIIT”. HIIT involves short bursts of intense exercise followed by short recovery breaks in between. For example, a trainer might tell you to pedal as fast as you can on the bike for five minutes before cycling at a leisurely pace for a minute. By switching up speed and intensity in this way, HIIT kick starts your metabolism, burns more calories and gets you in and out of the gym in half the time. If those benefits haven’t convinced you to try it, we don’t know what will!

It’s been on the fringes of the fitness world for a while, but “functional fitness” is set to become more mainstream in 2013. The logic behind it is all very science-y, but basically, everything our bodies do can be broken down into five key movements: squat, lunge, push, pull and rotate. With that in mind, functional fitness uses these natural movements to improve joint stability, mobility and endurance. So instead of isolating muscle groups like the abs or legs, functional exercises get various parts of the body working at the same time. While it’s a great add-on to any gym bunny’s workout, it’s especially good for those dealing with injuries.

Interestingly, many movers and shakers in the fitness world think that Pilates, swiss ball training and spinning won’t be as popular in the new year. Apparently, 2013 will be all about going back to the basics, which explains why many of the trends above focus on just using your own body to get moving.

Dance your way to fitness
Are you CrossFit?
Best workouts to reach your body goal