No one enjoys going to the doctor: it’s yet another chore that takes up time on the to do list and strips hard-earned funds from your purse. But sometimes, when certain embarrassing symptoms present, you have to put aside your anxiety and get checked out. “Women do lots of really awkward things each day — like waxing our bikini line, or wearing 3-inch heels,” says Kate Broun, spokesperson for the Cancer Council Australia. “But when it comes to something like getting a pap smear, too many women put it off or avoid it all together. While it may be awkward, it could save your life.” Here are seven medical symptoms you should never ignore. 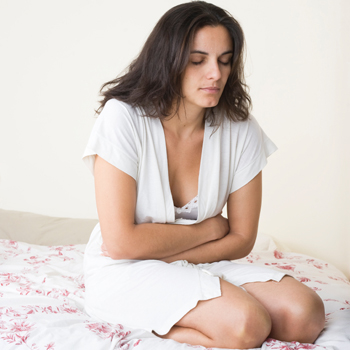 Spotting between periods is quite normal, but persistent, heavy bleeding may indicate that something is wrong. As cervical cancer progresses, symptoms can include vaginal discharge, abnormal vaginal bleeding — especially after intercourse — painful intercourse, or pelvic pain. “Some of us get quite anxious prior to getting a pap smear, but regular screening really is vital — especially if you have any of these symptoms,” Broun says. “As soon as it’s over you’ll feel very relieved, and you’ll know you’re doing something really important for your health.”

Certain foods such as beans, citrus fruits and rich, creamy desserts can make you feel bloated and full, resulting in some embarrassing and smelly emissions. This is because your body doesn’t always have the right enzymes to digest food completely, which allows bacteria to flourish and results in higher levels of gas and flatulence. A short-term instance of uncomfortable bloating and flatulence usually means you’ve simply eaten something your body doesn’t agree with, but if the problem is persistent, it’s advisable to seek medical advice, as it could be the early symptoms of Irritable Bowel Syndrome.

If you have a rash, itching, burning, discharge or any kind of discomfort in your groin area, it’s worthwhile visiting your local doctor. It could be a simple fungal infection, treatable with an over-the-counter cream, or it could be an indicatation of a bigger problem, such as a sexually transmitted infection (STI). Some STI’s can lead to serious issues if left untreated — like infertility — so hop to it.

Have you noticed that your hair is thinning, or that you’re suddenly growing more hair all over? If you notice significant changes in your hair growth patterns, book an appointment with your doctor, advises Sydney-based GP Dr. Penny Adams: these symptoms are often indicative of hormonal fluctuations and could indicate a condition such as polycystic ovarian syndrome (PCOS).

Next: 3 more symptoms women should not ignore