Being in a long-distance relationship can be tough at the best of times, but it’s even more stressful when your partner is in the Armed Forces.

Aside from the element of danger involved, the ongoing bouts of separation between you and your partner can by trying. There’s training exercises “out bush” that can go for several weeks at a time; interstate training sessions that keep you apart for months; and then the biggest separation of all, deployment, when your loved one is shipped overseas. 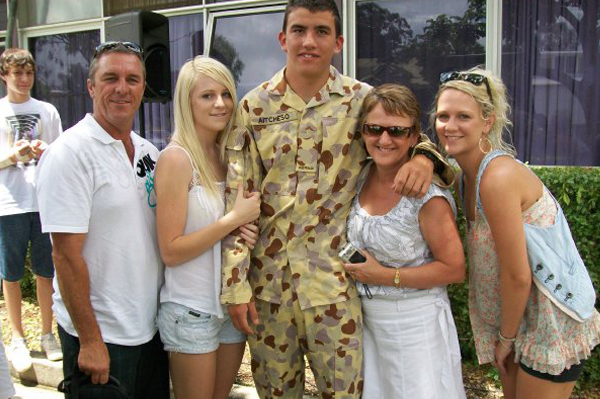 If being apart from your beau is a challenge you’re currently experiencing, take comfort in the fact that you’re not alone: according to Stephen Blake, author of Loving Your Long Distance Relationship, “more than 10 million couples worldwide are coping with long distance relationships — and that number is increasing daily.”

“Distance is not the end of the world in a relationship,” he adds. “It will not hurt a bond between two people that is based on mutual respect, trust, commitment, and love… regardless of the miles that may separate you.”

And there are things you can do to maintain your romantic connection:

Write him a handwritten love letter

Emails are undeniably convenient, but an old-fashioned love letter written in your own handwriting can be so much more heartfelt. Sprits the paper with a little of your perfume and he’ll feel like you’re standing in the same room.

Send him a package

Nothing says “I love you” like a box of carefully selected treats! Include his favourite lollies, peanut butter, magazines and other little luxuries he’s missing out on. Keep in mind that alcohol, clothing, aerosols, cigarettes, pork, chocolate and magazines with naked people should not be sent to soldiers.

Watch a movie together

Buy two copies of the same DVD, and send one copy to him and keep one yourself. It might be a new release that you would have watched together if he were home, or a classic movie that you both love. Even though you’re not in the same room, you can both tune in knowing that your partner is also watching!

We sat down with Brisbane-based beauty therapist Sara Conwell, who has been dating artillery soldier Gunner Larry Aitcheson for almost two years, to find out how she copes with having her man on the other side of the world.

At the beginning of 2010, Larry was deployed to Operation Herrick in Britain and Afghanistan; at 13 months’ duration, it’s the longest deployment for any Australian soldier.

“Larry and I first dated in high school. When we graduated he got into the army and had to move to Victoria, so we broke up,” Sara explains.

“About a year later he got posted back to Brisbane and we started dating again. We’d been together about eight months when he found out about his first deployment overseas in Afghanistan.

“He left in February of this year, and he’s going to be gone for 13 months. He got about seven months notice so he could train and prepare, so we had a bit of time to get used to it.”

“We tried to make the most of it — we went to theme parks and just made sure we had fun, and enjoyed the time we had left.”

“I’m quite close with a lot of the boys in Brisbane that weren’t deployed, so we’re looking after each other. The twin brother of one of my good friends was deployed, so he comes over quite a bit and we keep each other company. My girlfriends are really supportive too.

“We had a really big discussion before Larry left, and talked about our relationship and how to make it work with him gone for so long.

“If we really didn’t think our relationship would be strong enough to survive, we wouldn’t be together, but we’re committed to making it work.”

Counting down the days

“In September I get to go over to the UK to visit him for two weeks and really looking forward to that!”

“The Army arranges for one person to go over, but we’ve also invited his parents to come over as well — I’m literally counting down the days. I can’t wait!”

“The goodbyes are the hardest, but we’ve set up Skype so we can talk and communicate as much as possible. I think if I keep myself busy, I’ll be okay.”

10 hrs ago
by Angela Anagnost-Repke