Silence really can be power in dating but the secret is knowing when to speak up and when to shut up. How and when should women play the Quiet Game? 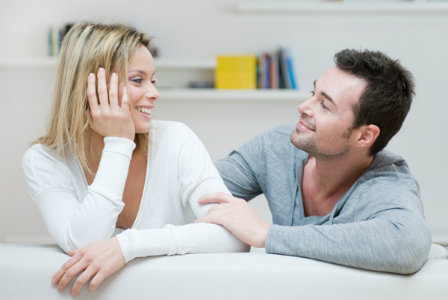 We’ve heard about The Quiet Man but rarely the quiet woman. We live in a world where women are taught — rather trained — to entertain, charm, make introductions, put people at ease… flirt. And what better arena is there to show off these carefully-honed social skills than dating?

But there are times, soldier, to stand at ease. You see a good communicator makes any situation comfortable. She smoothes over the cracks. In romance, however, sometimes those cracks carry warnings. When is it best to keep mum and when is it best to speak up?

This is an open field. Bear in mind that in the U.K., a country that’s not brimming with confidence, the men who do the approaching may be drunk… or they may be players. “Nice guys” are often found on the fringe and they might need to be brought out with your social grace. If you see someone you like in a bar or pub chat him up. And if someone likes you and he’s not immediately repelling, shut up and listen. He might have something for you.

Who sends the first text?

He does — and here’s why. It proves authenticity. When a man likes you he puts himself out there. If you text first and he simply concedes, he may not be as keen. It may sound old-fashioned but we suggest he leads on a lot of the communication until things are firmly established.

Who cracks first and says “I love you?”

Here’s where any strategy and game playing is off. This is the responsibility — and privilege — of whoever means it. You can do a lot worse than put yourself on the line for love.

And if it doesn’t work?

If you ended it with him, be kind… but be silent regardless of his attempts at reconciliation. Conversations open doors and you’ve closed this one.

If he’s ended it, accept it and be graceful. Try not to badger him with protests and questions. Keep his number in your phone — but only so you know who to screen when he comes back. And don’t crack unless he writes one of the following:

“I have a lot of explaining to do… and I have a ticket to the Maldives.”

The long and short of it?

When it comes to talking a lot of men probably think we should save it for commercial breaks. And, of course, they want us to listen more. They might be right on that one. There’s power in listening. It allows us to tune in and see the connections and departures from our true priorities and values.

But quiet time, if taken too literally, stifles the real you and that’s the last thing we want. We only push for a bit of self-control over what, how and when to speak up. Sometimes, it is the most necessary action to take. At other times, silence may give us the upper hand. Choose carefully.

50 Shades of confusion
Dating in a digital world
Romantic comedy