There are toys for almost any sexual appetite, but this sex toy designed for those with a foot fetish seems to be a little… well, off.

If you have a foot fetish, you might be in the market for a foot fetish sex toy. However, unless you’re a serial killer in the making, you might want to skip over this offering from Sin Boutique that can be yours for “only” $179 (link is NSFW). If you don’t want to (or can’t) click on the link, I’ll spell it out for you: This item is a silicone foot and ankle, complete with a vaginal opening down through the top of the thing so someone with a penis can have sex with it. This is what it looks like: 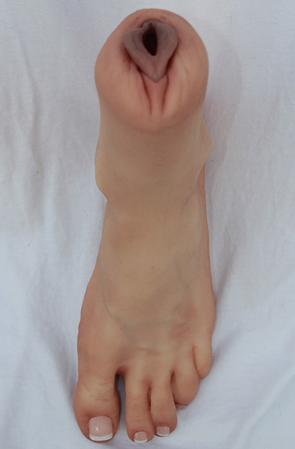 This particular sex toy, cleverly called the Vajankle, might appeal to those with a foot fetish, but a quick poll among my pals tells me that my initial reaction of “heck no” might be accurate. For example, one friend, whose husband likes feet quite a bit, said that he shuddered when he was shown the link.

In other words, if you want to have sex with a foot, I don’t think that you’d really be keen on replacing the leg bone with a vulva and a vagina. It’s creepy, and it looks like a trophy kept by a serial killer — not a fun sex toy. In fact, it reminds me distinctly of a book I read where a serial killer did something similar to his victims while they were still alive. Not only was this a horrible thing to read about, it was distinctly not sexy.

People buy disembodied silicone crotches for sexual purposes, which makes total sense — people generally have sex with crotches. And yes, some people like having sex with feet, but they usually don’t remove them from their owner and debone them to do so. It just doesn’t work that way, unless you have a suspicious need to keep visitors out of your refrigerator or your backyard.

I love the general idea, because catering to those whose sexual interests lie outside the mainstream is amazing. But if I was a guy who likes feet and got this as a gift, I’d not only not want to use it, but I’d be afraid to throw it away for fear of getting mistakenly arrested for chopping up bodies.

So, you almost got it, Sin Boutique. Almost — but not quite.