If you’ve ever signed up for an online dating service, you’re familiar with the basic questions that are designed to help you find your perfect match. One of the questions, inevitably, touches on your racial preferences.

Unfortunately, both anecdotal and scientific evidence suggests that most Americans are terribly racist in online dating, despite their aspirations to the contrary. Consider, for instance, a recent study by Kevin Lewis of the University of California San Diego, which found that racial prejudice has a significant impact on dating decisions.

According to Lewis, users of every racial background are more likely to start conversations with people of their own race. Moreover, men of all backgrounds are unlikely to contact both black and Asian women, and all female users were most likely to respond to the advances of white men. That’s racism, folks, and it is disheartening news for those who believe we’re living in a “post-racial” America.

Interestingly, even when women of color are contacted by white men, their experiences are still tinged with racism and prejudice. Reddit’s AskWomen Subreddit recently asked women of color for their observation of racism in online dating, and their answers were illuminating.

“I usually get comments about how ‘white’ I act, or how I’m not a real black woman because I’m not loud and I’m getting a degree,” said biracial Reddit user Mmvela.

Another Reddit user recalled trolling pick-up lines that were insulting and cruel for no reason. “I’m Asian. I get people saying ‘ching chong chang,’ which doesn’t make any sense at all and I don’t even speak Mandarin,” she said.

Black Reddit user TerribleAttitude explained that her experiences weren’t all bad, but non-black men didn’t seem to understand how insulting their small talk came across. “It wasn’t necessarily a constant deluge of racist and fetishizing bullshit,” she said. “But it wasn’t uncommon, either. On the more mild side it was, ‘Ooh, I love black girls/soul/sass/church/soul food/ass clapping/obsession with afros.'” That doesn’t sound very mild to me.

And in case that doesn’t make your spine shiver, here are a few very real and very concerning messages that women of color have received while trying to date online: 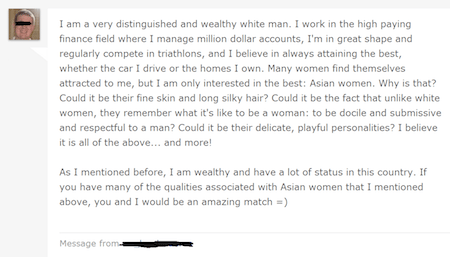 Image: The Ladies of OKCupid The women who responded that they had never experienced racism in online dating were quick to concede that they didn’t include their racial information on their profile, or that they were lighter skinned than many of their peers from their same racial background. Although this additional information was presented in a positive light, it still sounds like the flip side of a racial system that favors white people — whether anyone admits it or not.

Tell us: Have you experienced racism in online dating?

Read more in our Diversify the Story series.

9 hrs ago
by Sara Dobie Bauer