Breaking up is never easy, and neither is meeting the new girlfriend, even if you have moved on with your life. If you and your ex run in the same circles, share custody of children or live in a smallish town, chances are you’re going to bump into your “replacement” sooner or later. Our handy guide provides valuable tips on meeting your ex-partner’s new girlfriend with grace and decorum. 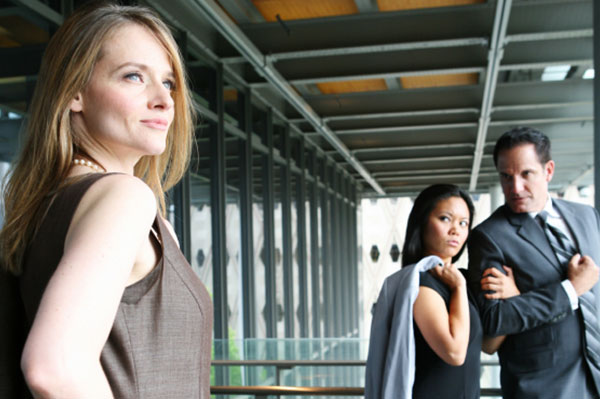 When you discover your ex has a new girlfriend, it’s only natural to want to know what she looks like. Secretly you’re hoping she’s shorter, fatter and smells like old potatoes, while fearing she’ll be a blond Amazon with legs up to her armpits, speaks three languages and drives a Ferrari. To avoid blatantly staring as you give her the once-over or being rendered speechless if she’s a supermodel, get busy stalking her online. Find out her name, Google her and Facebook her, and learn everything you can so there are no surprises.

Look smoking hot at all times

The moment you leave the house without makeup or brushing your hair and wearing sweatpants is likely to be the moment you will bump into the happy new couple. Don’t dress to kill — there’s an art to looking gorgeous while still appearing like you haven’t put much thought into what you are wearing.

If your ex comes to the house to pick up the kids for the weekend, make sure you don’t answer the door in pyjamas, just in case your replacement has tagged along for the ride.

As tempting as it might be to pounce on her with fists flying, remember to be polite and to smile. No one is asking you to become her best friend, but it won’t kill you to be nice to her for five minutes. If you’re dying on the inside or unable to control yourself from making derogatory comments, make your excuses, and leave before you embarrass yourself.

If you’re still in the process of getting your life on track, it’s OK to tell a few white lies. It’s none of their business if you still cry yourself to sleep or your dating life is non-existent. When making things up, try to keep them believable rather than blurting out that you’re dating a brain surgeon and take his private jet to Paris every other weekend.

Don’t try to be her new best friend

She might be lovely, and the two of you might have a lot in common, but if you find yourself inviting her out for coffee or organizing a girls-only shopping trip, make sure you’re not motivated by either trying to break them up or by staying close to him by making his new girlfriend your new BFF.

There’s no reason to be jealous. She might be gorgeous, but no one is perfect — particularly your ex. After all, there are reasons you are no longer in a relationship with him. Remind yourself of all the revolting habits she has yet to discover.

Is your jealousy becoming a problem? >>

Let your kids make up their own minds

Your children will be having a hard enough time dealing with the fact that their dad has a new girlfriend without you trying to poison them against her. You’re the adult here, so act like one. Encourage them to show her the same respect they would to you.