It’s true that first impressions are everything when it comes to dating, but no one warned us the signals would be so overwhelming. Paying attention to key factors during a date can help you see into his character and determine your compatibility with each other. Look for these 10 signs during your next date to help you decide if he’s worth seeing again. 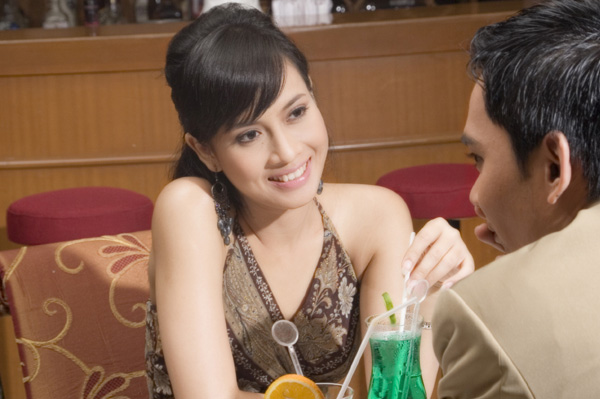 Some food for thought: 71 per cent of people surveyed at Top Dating Tips said they believe in love at first sight — and that includes men. No, we aren’t talking if you fell in love with his bod, but what you felt inside when your eyes locked. There is an inherent spark when your eyes meet and a deep-seated mutual attraction is felt, so pay attention. The seed of love is usually planted the first time you meet someone, so theoretically, Romeo and Juliet had it right.

“It was like we’d been best friends for years.”
— Samantha Davis, on meeting her husband Joshua
2

He ignores his phone

This might sound like a no-brainer, but you’d be surprised how many men actually pull out there smartphones during a date. It doesn’t necessarily mean he’s rude or obnoxious; it could just be a bad habit. However, if you scored a dinner with a guy who is aware and thoughtful enough to fight the urge and to give his undivided attention to you, it speaks volumes about his character.

The first date I had with my fiancé was when I knew I would marry him. I’ve always been shy and overly self-conscious, so dates with guys always had those awkward “what do I say next?” moments. When I met him, it felt like I had known him for years. There was never an unnatural moment or one of unease, and many women report the same. You should feel comfortable and happy with him from the first second.

Easy conversation is the first indication of how strong your chemistry will be. When you first meet someone, naturally there are a few moments when nerves might cause you to stutter, but if conversation is a constant struggle, don’t force it. Conversation will always be easier on a second date, but don’t settle. It should be easy on the first date.

“Within the first 10 minutes of our first date, I lit my menu on fire, and somehow we managed to laugh it off. His ability to make me feel less embarrassed and at ease after that incident made me instantly realize that, given there was a second date, I was going to want this guy to be a part of my life.”
— Kaitlyn Doescher, on meeting her current boyfriend
5

He mentions his mom

This automatically makes him worth a second date. This is not to be confused with the guy who mostly talks about his mother and who steps outside to take calls from her. This is when your date mentions his mom fondly, and his eyes light up when he talks about her. Even if he mentions her only once, it’s a strong indication that he is family oriented and honours and respects women.

He makes you laugh

Humour is everything. Marilyn Monroe once said that if a guy could make her laugh, he could make her do anything. If you can laugh together from the start, the possibilities for a great relationship are wide open. Life is hard, and being able to laugh together is an indication you’ll be able to handle the ups and downs of it.

If you find yourselves talking about little things you want to do together in the future, chances are you already want a second date. I’m not talking marriage (major red flag) but rather things like trying his cooking one day or having a picnic. Making little plans gives you both confidence in a possible future together.

You don’t want to go home

He is definitely worth a second date if you don’t want the first one to end. The worst end to a date is a quick one, regardless of how polite and casual it is. When you’re compatible with each other, you’ll find yourselves making an impromptu trip to the corner coffee shop after dinner, talking for hours or walking home instead of taking a cab. The night should be longer and feel shorter than expected.

He treats the server well

If the guy you’re on a date with doesn’t show respect to a server, forget about a second date. You can tell a lot about a man when he treats those serving as inferior. Keep an eye open for a guy who makes conversation with the server and leaves a 20-per-cent or higher tip — even when it’s not deserved.

He doesn’t try to kiss you

Dating: From your 20s to your 50s
Tips for meeting people in a new city
What not to eat on a first date

Best Couples Workout Moves to Strengthen Your Bodies & Your Relationship

The Rise of Sober Curiosity: Is Life Better Without Alcohol?