You’ve heard often enough that it’s not OK for someone to hit you or touch you inappropriately, but there’s another form of abuse that isn’t talked about as much and therefore often goes unnoticed.

Related story Why Emotional Labor Is a Feminist Issue 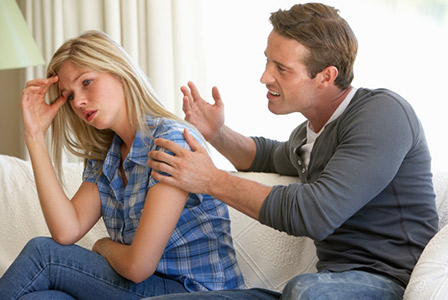 It’s time to put a stop to that and finally talk about the damaging effects of emotional abuse and what you can do to protect yourself and your loved ones.

What is emotional abuse?

Deal.org defines emotional or psychological abuse as “the systematic tearing down of another human being.” Like other forms of abuse, it is achieved through the use of power and control. Unfortunately, due to the lack of physical evidence, emotional abuse is harder to recognize and therefore often goes unreported. But its being less recognizable doesn’t make it any less damaging.

The forms of emotional abuse

The Department of Justice Canada reports that emotional and psychological abuse can take on many forms, such as stalking, breaking your things, isolating you from friends and family or making threats to harm you, your pets or your loved ones, all of which are punishable by law. Other forms of abuse include the following:

These and any other forms of bullying might not be criminal forms of abuse, but they are serious, and you have every reason to seek guidance. The bottom line is this: If someone hurts or mistreats you, it can be considered abuse.

It isn’t just the young who are affected. Learn more about elder abuse >>

The prevalence of emotional abuse

When to get help: Abuse can happen to anyone — female or male, old or young, married or single. You don’t have to fall into any category or statistical prevalence to experience this type of abuse. If you feel you’re being emotionally or psychologically abused, seek help.

A 2009 survey by Statistics Canada revealed that 17 per cent of Canadians aged 15 and older had experienced emotional or financial abuse from a current or ex-partner at some point in the relationship. That’s close to one in five. The most common types of emotional abuse were put-downs and name-calling. Of those interviewed, 53 per cent reported this type of abuse. Other high-rating areas were jealousy, demanding to know one’s whereabouts and trying to limit contact with friends and family.

Children can also be deeply affected by emotional abuse. A study published in the journal Pediatrics revealed that 9 per cent of women and 4 per cent of men surveyed in the U.S. and Great Britain reported severe psychological abuse in childhood. And a number of other American surveys indicate that more men and women experienced psychological maltreatment as kids than any other form of abuse. This evidence suggests psychological abuse might be the most common form of abuse children suffer.

The most important thing when dealing with emotional abuse is to never diminish or trivialize your feelings. Just because the damage isn’t visible doesn’t mean it isn’t serious. If you or someone you love is experiencing psychological or emotional abuse, do not hesitate to seek help from a friend, family member, counsellor or other resource you trust. Abuse of any kind is wrong, and the victim has done nothing to deserve maltreatment. Visit 211.ca to find resources available near you.

Ideas for a mental health break
Alcoholism: Are you at risk?
Depression in the workplace: What you can do

15 hrs ago
by Hannah Rimm

15 hrs ago
by Nadine Avola

16 hrs ago
by Michele Borboa MS