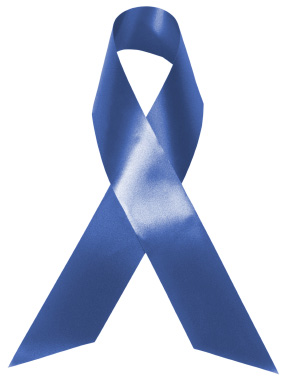 It’s time to start talking about…

Every day an average of 64 Canadians are diagnosed with colorectal cancer. The good news is that colorectal or colon cancer, when caught in its early stages, is one of the most curable cancers there is.

Anyone can develop colorectal cancer, but some people do have a higher risk of developing it than others. These include people who

People don’t often talk about their bowel habits, so it isn’t surprising that many don’t know what to look for that might suggest they should be tested for colorectal cancer. While not everyone may have these symptoms, these are the most common signs and symptoms of the disease:

If you have any of these symptoms, ask your doctor about being screened for colorectal cancer.

Regular screening for colorectal cancer should be done even if you don’t have any risk factors or symptoms. The Canadian Task Force on Preventive Health Care recommends that people aged 50 years and older should have a fecal occult blood test (FOBT) every one or two years. This simple test can detect blood in the stool that might not be otherwise visible. This is not an invasive test. You just have to supply a small sample of your stool.

For people who are at higher risk of colorectal cancer, sigmoidoscopies and colonoscopies can help detect growths in the colon. A sigmoidoscopy looks at the rectum and the part of the colon closest to the rectum. A colonoscopy can go farther into the colon.

For the procedure, the doctor inserts a flexible tube into the rectum and slowly advances it. Using the camera that is at the beginning of the tube, the doctor examines the colon walls for signs of polyps or tumours. If a polyp is found, it can be quickly removed and sent for biopsy to see if it is benign (non-cancerous) or malignant (cancerous).

Many people dread the idea of having a colonoscopy, but while it can be uncomfortable for some, it can be and has been a lifesaver for thousands of people.

Colorectal cancer is a killer, but it doesn’t have to be if it is caught early. Don’t be shy; get screened.

Ovarian cancer: Being aware
Your guide to the prevention and detection of skin cancer
Why you need a Pap smear