This ancient fermented tea is making quite an impression on the health-conscious populace of North America. Kombucha is famous for revitalizing the drinker’s body and mind. What else can it do? 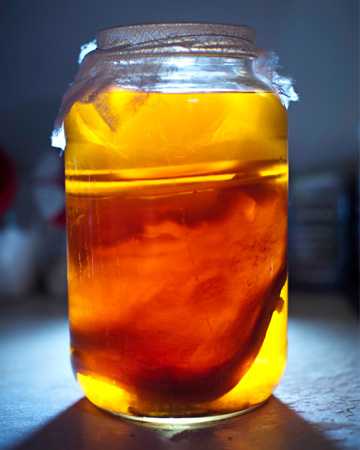 This little tea drink is no longer just toted around by Californian yoga instructors and retired hippies; Kombucha is getting some serious attention. Believed to have incredible health benefits on the drinker’s body, is it any wonder?

While it’s easy to break it down into neat categories, Kombucha is an understudied substance best experienced than read about. Talk to your friends, try it for yourself, and then form an opinion. Here is a little compilation of what you need to know about this mysterious tea.

Despite the odd name, this drink is quite simple. Kombucha is a fermented tea produced from a symbiotic colony of yeast and bacteria. Dubbed a “magical elixir,” the tea originated in Asia and was introduced to Russia sometime before the 19th century. Its popularity eventually spread to Germany and subsequently to the rest of Europe. The tea is said to be incredibly beneficial to the consumer and is believed to be able to ward off cancer.

Scientifically speaking, very few studies have been conducted on the tangible benefits of Kombucha. Most observations are based on surveys, hearsay and testimonies of loyal tea drinkers. Keep that in mind.

The magic of glucuronic acid. This little carboxylic acid has a longer list of benefits than life itself. OK, not really, but it’s got quite a few. Kombucha is believed to contain a high quantity of glucuronic acid, which strengthens cells and fortifies joints. It has also been associated with cancer-fighting qualities. Basically strengthen your immune system is what it does.

Antioxidants. Since Kombucha is usually based on green or black tea, it contains the same beneficial attributes as these teas. Kombucha’s antioxidant qualities are believed to prevent cancer, strengthen the consumer’s overall cardiovascular health and lower cholesterol levels. Now that ain’t half bad for a tea.

Cleansing. Kombucha is based on a bacterial culture — hence, fermented tea — and is incredibly good for the digestive system. It helps clear your entire body, especially your liver and kidneys. Drinking the tea on a regular basis has been reported to reinvigorate the drinker’s mental metabolism, which is attributed to Kombucha’s high vitamin B and B6 content. Caffeine present in the tea may also have an effect.

Since very few studies have been conducted on the concrete benefits of Kombucha, it has been accused of precipitating a variety of medical conditions and reactions. The incidents reported are usually an exasperation of a pre-existing condition or an allergic reaction, which are risks attached to any new ingestible substance. Many people do not attribute these to the tea, and there is no evidence to the contrary.

Many concerns have been raised about home brewers, who may be making Kombucha in unacceptable conditions. If the temperature is not consistent and cleanliness not up to par, Kombucha’s bacterial culture can develop common mould, at which point it is no longer safe for consumption. If you’re thinking of brewing your own Kombucha, just keep everything clean.

The best policy here is to try Kombucha for yourself; results and benefits tend to differ from person to person. Don’t be afraid of it — maybe it will work wonders on your digestive system or revitalize your mind! Let us know what you think.

Surviving holiday excesses
What to do when your busy life becomes too much
Donating blood: Why, where and how?