If you’re a junk-aholic, you may want to start stocking up now. Doctors in Ontario announced this week that they think it may be time to use the same tactics on junk food that have been used on smoking for decades. 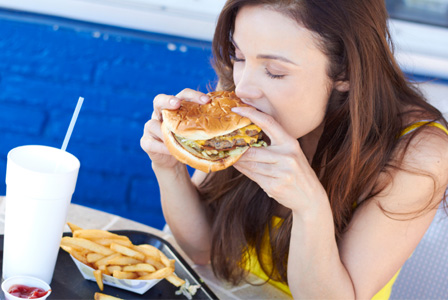 The Ontario Medical Association (OMA) launched a campaign this week to battle childhood obesity in some new and controversial ways. In addition to the somewhat familiar concepts of restricting the marketing of unhealthy foods to children and limiting the availability of such foods at sporting events and recreational facilities, OMA has some other ideas in mind. The association wants to give junk food the same treatment cigarettes have been saddled with for decades: additional taxes and graphic warning labels. OMA president Dr. Doug Weir explained the association is pushing for the province to tax foods high in calories and low in nutritional value, while offering tax breaks on healthy foods. He explained that the organization is also hoping to make the packaging of high-fat and high-sugar foods be required to have graphic warnings that depict the damage obesity can do to the human body.

Undeniably, obesity is becoming an increasingly serious issue in our country. Statistics Canada determined that 31.5 per cent of Canadian children aged 5 to 17 are overweight or obese. That’s almost a third! OMA also revealed that obesity costs Ontario between $2.2 billion and $2.5 billion per year. So the evidence certainly suggests that something needs to be done. OMA compares what it’s suggesting to what happened in the 1960s, when anti-smoking campaigns and taxes on cigarettes were first introduced. The association feels the methods used then helped to take the Ontario smoking average down from 50 per cent in 1960 to the 20 per cent it is today, and it wants to use those same tactics on junk food as soon as possible. There was indeed a time when people would have thought it ridiculous to put images of damaged lungs on packages of cigarettes, but now we wouldn’t expect it any other way. So is this the type of issue future generations will look back on and think, “it took them long enough”? Or is it an unnecessary step?

Nothing airs out an issue and gets as many opinions as possible quite like asking the general public what it thinks. So that’s exactly what we at SheKnows did! And it quickly became clear that this is one issue over which people are very much split in their beliefs. Paul Nottoli said he agreed with the tax increase on sugary foods, since sugar is addictive and can lead to obesity, chronic inflammation and other health problems. But Robert Clarke asked, “Has taxing cigarettes or alcohol stopped people from smoking or drinking?” And Lisa Cox expressed concerns about who would be the higher power that determines which foods get taxed and which ones don’t — where does the line get drawn? And how much money is going to go into deciding what’s considered healthy and what isn’t? Furthermore, when it came to the notion of putting graphic negative images on bad foods, many people just don’t see what it will achieve. Kira Golden broke it down this way: “I don’t think anyone really needs a label to know a candy bar is worse for them than a salad.”

As Canadians we are incredibly fortunate to have free health care. But that also means we have to act responsibly today to ensure our heath system can support us years down the road. And some people feel that implementing a tax on junk food now will help the system pay for the growing obesity problem that is slowly overtaking the country and that treating boxes of junk food like packs of cigarettes will deter people from consuming them. But will scary pictures of diabetes and obesity really stop people from giving in to sugar cravings? And will the money gained from a new tax go to the right places and improve our health care system? Or is it just a money grab? No doubt, there are some big questions that still need answering.

22 hrs ago
by Elizabeth Yuko