If you’ve ever been passed on a run by someone with an odd little M-shaped symbol tattooed on his or her calf or sporting a shirt with the title “Ironman Finisher,” you may have wondered what it would take to earn such a title for yourself. We get you the inside scoop on what an Ironman is and how you can become one.

Related story The Amazing Reason This Woman Is Running 100 Marathons 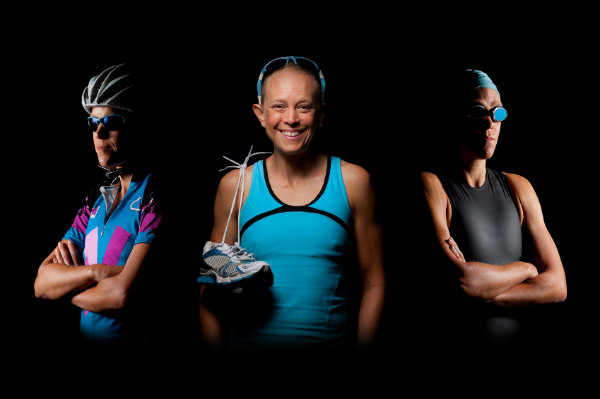 What does the race entail?

The race is a combination of swimming, biking and running, like your average triathlon. But unlike the shorter triathlons you or a friend may have tried, the distances are considerably greater. With a swim of 3.8 km, a bike ride of 180 km and a run of 42.2 km, it truly is the challenge of a lifetime. And for anyone who did the math here, the run portion is in fact the distance of a marathon — after multiple hours of swimming and biking! The race starts at 7 a.m., and you have until midnight to finish it. The pros will come in around the eight- or nine-hour mark, but many will take up to the full 17 hours to get the job done. And unfortunately some won’t finish, whether due to injury, exhaustion or simply being unable to meet the cut-off times along the way.

Where to do one

As Ironman races become increasingly popular, more opportunities are popping up all over the world. If you enjoy travelling, you could jet off to France, Australia or many other fun and exotic locations to accomplish yours. Or if you’d prefer to stick close to home, check out the all-new Ironman Mont Tremblant. It was met with rave reviews when it took place for the first time this year. Kevin McFaul, who completed his first race there in August, described it as having “beautiful views, a well-structured course and plenty of encouraging volunteers and spectators scattered throughout.” Dozens of races are also held all over the United States if you don’t mind a quick journey south. In addition, you’ll find plenty of Ironman distance races that offer you the same race experience but are run by other companies and therefore can’t use the Ironman name. They may not be under the Ironman brand, but they’ll certainly have you feeling like a superhero regardless. The entry fees for those races tend to be less, so if you’re more driven by the challenge than the name, they’re certainly worth considering.

What’s the hardest part about training?

Sylvie Dansereau, a coach with the Canadian-based training group NRGPT, explains that many new Ironman athletes struggle to achieve a good balance in their training. She elaborates that a well-designed schedule is one that will allow you to progress and get fitter in each of the three sports without overtraining, which could cause you to be sick, overtired or injured come race day. It’s natural to want to succeed, but keep in mind it’s not a sprint — it’s not even a marathon — it’s three marathons. If you’re new to ultra-distance racing, one solution is to hire a good coach with lots of experience in the area. A coach will help put together a plan that suits your needs and ensures you’re in the best condition possible when the big day arrives. If a coach isn’t in your budget, Dansereau advises new athletes to seek out information from reliable published sources so they can make educated decisions about how to approach training. She also encourages athletes to be realistic about their life schedules and constraints when planning out their training, as an ultra-distance triathlon is undoubtedly a large time commitment.

Although there is undoubtedly plenty to think about on race day, Dansereau explains there is a “fourth discipline” that is even more crucial than being prepared for the swim, bike and run. And that fourth discipline is nutrition. She explains that “without proper fuelling, even the fittest athlete may come to a crawl or even a halt on race day.” Dansereau recommends that the athlete’s optimal racing nutrition strategy be carefully developed and practiced throughout training in the months leading up to the race and then stuck to when race day arrives. And this is one athlete and trainer who’s advice you certainly want to take — she won in her age group and came in fourth overall at Ironman Canada 2005!

Obviously an Ironman isn’t your average 5 km race. Many people take up to a year to train and get their bodies in peak condition. Also, because registration for each race opens roughly a year before it takes place and fills up almost immediately, you’ll have to decide well in advance if you’re ready to make the commitment. Another aspect to consider is budget. Not only will registration cost you over $600, but proper equipment, travel and accommodations add to the total price. So it certainly isn’t an undertaking to approach lightly. But once you think you’re physically and mentally ready to make the commitment, give it your all!