Author and filmmaker Dana Adam Shapiro has a new book on the shelves that may change the way you think about marriage, relationships and even divorce. While the title in itself is enticing, this isn’t your average book on relationship advice. In fact, the advice and tips you take away will be solely your own. 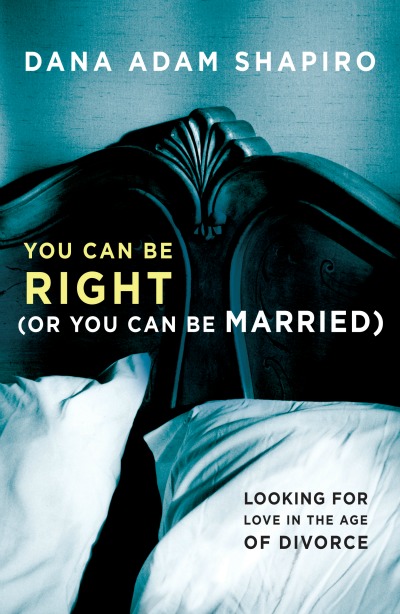 Dana Adam Shapiro’s book You Can Be Right or You Can Be Married is a new approach to relationship advice that just may be worth the read. The cover of the book reads, “Looking for love in the age of divorce,” and Shapiro, who has never been married, set out to discover why love doesn’t last.

The book includes a series of interviews with people who all have one thing in common: They have been divorced. As you read each person’s recap of their marriage and subsequent divorce, you may find yourself applying their experiences to your own relationship issues. We wanted to know why Shapiro took this approach, what he learned and what he hopes you will take away from his experience.

SheKnows: What would you advise couples to discuss before heading down the aisle to make sure that they are really in it for the long haul?

Hopes, fears, kinks, needs, spending habits, religion, politics, kids, are you going to keep your cellphone on the table during dinner…  In other words, everything — especially the stuff that makes you nervous or uncomfortable.

SheKnows: If you had to select one thing that couples could do to boost their relationships, what would you suggest, knowing what you know now from all of the divorced people you spoke to?

One of the men I interviewed said, “My advice to anybody getting married would not be to learn how to get along, but to learn how to fight fairly and productively.” And I think that’s great advice. Getting along is easy; it takes care of itself. But if you can’t fight well, you’re doomed.

SheKnows: Why did you think the words of others would be more powerful than a synopsis of what you learned?

Marriage has always been this great mystery to me — nobody really talks about it. In my mid-30s, a lot of my friends started getting divorced, and when they told me, I always felt like the neighbour of the serial killer. “But you seemed so happy!” That’s why I started writing the book. I wanted to hear first-hand about what’s really going on behind closed doors so I could learn from those mistakes.

SheKnows: A few of the people mentioned drastic changes happening after the marriage. What do you think it is about getting married that causes people to change or relationships to decline?

I think that a lot of people see marriage as the end goal instead of the very beginning. We put so much

energy into finding a spouse, then living together, then planning a wedding, and when it’s all over, there can be this collective “whew.” And that sigh of relief is amazing, but it’s a big mistake to think that the chase ends at the altar. You can’t rely on this theoretical notion of unconditional love; you still have to entice and impress and seduce each other. To be worthy of each other. Someone I interviewed told me, “The fact that divorce is a possibility is probably a good thing for making people stay on their toes. If you knew for a fact that this person was going to be yours till the day you die, you might really become complacent and make no effort.” That was the root cause of so many splits: It all started with complacency.

SheKnows: You’ve never been divorced or married. What would you say your biggest take-away is from this book that you’ll use moving forward in future relationships?

One woman I interviewed told me, “In a marriage, there’s no hiding your complexity from the other person or the other person hiding their complexity from you. Eventually all your shit comes out, and it comes out in full force, so you might as well stop pretending sooner rather than later.” So that was the biggest take-away — accelerate the inevitable. Just be yourself as quickly as possible. Have the balls to be vulnerable. It sounds so simple, but it’s the hardest thing to do, losing that fear of rejection.

SheKnows: Are you more inclined to think marriages can work now, or that divorce is imminent?

Personally, I’m more optimistic about marriage. And by that I mean more realistic. I think that’s the key: adjusting your expectation. The “fairy tale” is a fairy tale. A man I interviewed said it best: “There is something absolutely divine — I mean, literally, the breath of God — in the ability to put someone else in your heart, to think of them first. But from the time of the greatest pornographer who ever lived — Shakespeare — we’ve demanded that love be something more. And what happens is, the utter grandeur and magnificence of what love actually is gets overshadowed by this disappointment that it’s not the way we fantasized it should be.”

SheKnows: Many of the people interviewed had affairs or their spouses did. While it is unfair to say the person being cheated on was at fault, how important do you think it is that both couples take some responsibility for issues in the relationship?

Nobody should ever say “you made me cheat.” That’s absurd. There is never any justification for lying, or for putting your spouse in danger, or for setting them up to look foolish. The core of any relationship has to be a mutual respect, and when it comes to adultery, the cover-up is often more damaging than the crime. That said, in most of the cases where there was adultery, the marriage wasn’t working. And more often than not, that’s both people’s faults.

SheKnows: Is there a point where it really is too late for a relationship, or can couples make it work if they are willing to put in the work?

Marriage relies on unanimity, of course, but divorce is usually a unilateral decision. When one person wants out, it’s done.

SheKnows: Many people say their spouses changed over time, and then they were no longer compatible. Do you think failed relationships are really due to lack of compatibility or an inability to adapt and work through the inevitable changes that will take place during a lifetime?

Sometimes, even with the best intentions, we grow apart. But I don’t necessarily think that the marriage is a failure if it ends in divorce. We’re taught to believe that true love is synonymous with eternity — till death do us part — but that’s a very simplistic view. You can love and respect each other, even raise a family together, and then maybe down the road you decide to move on. I don’t necessarily think that’s a failure.

SheKnows: Did you find there was a consensus between men and women in terms of what needs weren’t being met? If so, what were the biggest issues for men and women, respectively?

Compromise is essential, of course, but many people talked about compromising too much. They buried their desires. They lost their identities. They compromised themselves into oblivion. It’s a noble gesture, to try to become someone else’s ideal, but it’s a recipe for disaster. Also, sex. Sexual dissatisfaction came up in every single interview. People feeling unwanted, unsexy and ultimately unloved. I don’t think any marriage can survive without physical intimacy.

SheKnows: It’s safe to say that everyone who reads your book will respond to different aspects of it and take away different lessons. What do you want people to get out of reading these stories of other couples?

For single people, I hope it serves as a dating guide, how to make sure the love is true before saying “I do.” For married people, I hope it will spark tough conversations and ultimately give couples the tools to fix a relationship worth fixing. Or, just as important, for people who are stuck in bad marriages, I hope it gives them the courage to walk away.