Cheese is one of the most consumed products in North America. It can be served at every meal from morning to night, with a few cheesy snacks in between. We’re convinced cheese can make any dish better. 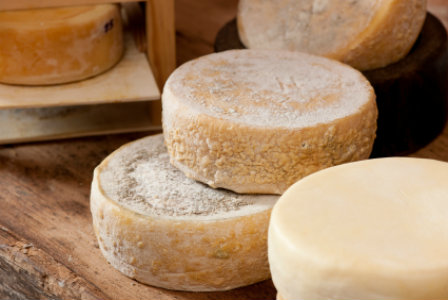 To honour this delicious food, we’ve rounded up some fun facts to give you a little insight into what you’re eating.

Cheese-making and consumption predates recorded history. Early archaeological evidence of cheese-making was found in Egyptian tomb murals. Because it was so hot and they lacked proper conditions for storing cheese, it was likely extremely salty, as salt was used to preserve the cheese. The cheese was probably soft and crumbly in texture too, with a sour flavour similar to feta cheese. Later, cheese made in Europe, where the climate was cooler, allowed for better flavour, as the cheese was able to age slightly.

All cheese is made in four steps: curdling, draining, pressing and ripening. The different flavours of cheese are based on the milk used, the unique methods in each step, the types of bacteria or moulds used for ripening, and the amount of salt or seasonings added. The various conditions at each step can also contribute to the different flavours and textures of cheese.

According to Restaurant Central, cheddar cheese is the most widely made cheese in the world and the favourite of Canadians at breakfast, lunch and dinner. The least favourite options out of a list of 10 were Gruyere and Asiago cheese. Blue cheese is a favourite as a burger topping and is often mixed in with the meat instead of being melted on top.

According to Salt Spring Island Cheese, the outer rinds on some cheeses, like brie or Camembert, are formed from the penicillin mould used to ripen them. Unlike other cheeses, these types of cheese, known as surface-ripened cheese, ripen from the outside in. This explains why the centre is softer and creamier than the outer portion of the cheese. Rinds found on natural rind cheeses like Parmesan are removed before they are sold. Cheeses like cheddar don’t have a protective rind, so they’re often covered in wax to prevent mould growth.

The odour from cheese can make people wary to try it. However, the odour is often much stronger than the actual taste of the cheese. The odour is produced from the bacteria or mould used to ripen the cheese. Limburger cheese is one of the most notoriously smelly cheeses thanks to its ripening bacteria: brevibacterium linens. This same bacteria is found on the human body and contributes to body odour.

One of Canada’s most famous exported cheeses is Oka. Oka is named for the place it was originally created: Oka, Quebec. It was originally made by Trappist monks. The only other place that produces this type of cheese is in Holland, and the flavour is slightly different from the Canadian version.