Are you dating someone fairly new and wondering if he’s into you for a serious relationship? Here’s how to tell if he’s ready to make a commitment.

Related story Letting Go of Your Ego Might Be the Best Thing to Improve Your Relationships
Is he ready for a commitment? 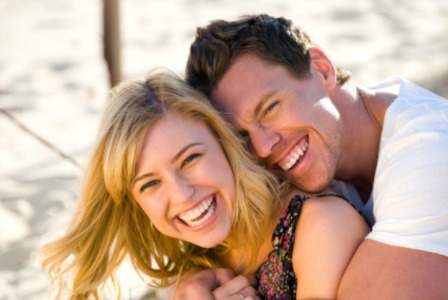 Early on in the relationship when you’re dating someone is an exciting time. You have that fluttery feeling in your stomach, you feel like you’re on cloud nine when things are going well, and he seems just as into you. But it can be a bit nerve-racking if you’re really into him and thinking this could be a long-term relationship, but you’re not sure if he’s into making it a serious thing.

Pay close attention to his actions and words. What he does and the words he chooses can show you whether he’s serious and thinking about making a commitment to you for the long term (or even forever). Here are some specific things to be on the lookout for.

He refers to or makes plans for the future

We’re not talking next week or the upcoming weekend — we mean plans for next year. Has he suggested a holiday to Europe together next summer? Or has he gone ahead and bought concert or show tickets for something happening several months from now? These are pretty clear signs he foresees you and him being together for longer than just the immediate future.

He wants you to meet the important people in his life

Sure, meeting the parents is always a biggie, but there are other significant people to meet. From the best friend he plays hockey with to that childhood buddy he doesn’t see often but remains as tight as ever with, these people know him well, and he wants you to get to know them and vice versa. Even meeting his colleagues or boss at a work function can be an indication he’s into you. After all, it’s unlikely he’d introduce someone he sees as a fling to someone as key as his manager.

He deletes his online dating profile

If you met through an online dating website, chances are you’ve both left your profiles active for a while. But once you start seeing him more often, you may see him online less and less often, and one day you may find he’s deleted his profile altogether. He may tell you about it — perhaps as a hint that you should take yours down too — or he may simply let things play out.

He tells you he wants to be exclusive

Sometimes men can be a mystery, but other times they can surprise you with their forthrightness. If that’s part of his personality, he may simply bring up the topic and ask you to stop seeing other men and for you two to become exclusive. Then your answer will be clearer than ever.