You’ve likely heard that it’s best to avoid eating late at night to avoid gaining weight. But just how true are such statements?

Related story Could Your Obsession With 'Healthy' Eating Actually Be Orthorexia?
What midnight snacking does to your body 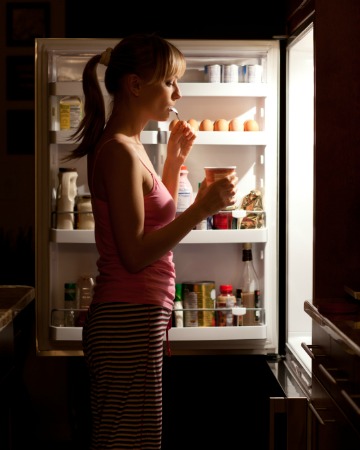 Read on to find out how much damage a midnight snack really does to your body.

In response to the question of whether late-night eating causes weight gain, Dr. Louis J. Aronne, director of the comprehensive weight control program at Weill Cornell Medical Center/New York-Presbyterian Hospital, told The New York Times that his “clinical impression is that people who eat late at night eat more.” For many, that late-night food intake isn’t the third meal of the day; it’s the fourth. Which means you’re taking in additional calories your body doesn’t necessarily require.

It has nowhere to go

Dr. Aronne goes on to explain that eating a big meal before bed can elevate trigyceride levels, and this elevation can lead to metabolic syndrome and insulin resistance, which are related to weight gain. In other words, when you eat a big meal right before going to bed, your muscles are not active, and therefore the body has nothing to do with the incoming food but to store it as fat. If you eat that same meal in the middle of the day while you’re up and about, your muscles compete for those calories, which means less of them end up being stored as fat.

Late-night meals tend to be unhealthy

Many diets out there tell you not to eat after a certain time. Ultimately, however, you body isn’t going to magically gain weight simply because you ate an apple at 8:02 p.m. rather than at 7:55 p.m. Unfortunately, though, the late-night snacks most of us gravitate toward aren’t carrot sticks or pear slices. Instead, we curl up in front of the TV with a bowl of ice cream, a bag of chips or a few solid handfuls of candy — the types of foods that can be damaging at any time of the day. To avoid unhealthy late-night snacking, dieticians recommend not going longer than five hours without eating so you won’t feel hungry. If you do find yourself hungry after dinner, reach for a light, healthy snack, such as a piece of fruit or a glass of milk.

So is the belief that late-night eating causes weight gain true or false? Ultimately it’s a bit of both. Calories can’t read clocks, so there is no magic time at which you have to stop eating so you don’t gain weight. That said, eating bad foods or large portions late at night may cause you to pack on unwanted pounds. Moral of the story: Eat healthy meals throughout the day, and if you find your stomach grumbling at night, reach for something light and nutritious.