OK, so you might not ever be an Olympic athlete, but that shouldn’t stop you from trying an Olympic sport! Take a cue from the Summer Games and try one (or more) of these cool sports just for fun. Who knows? It might just become a lifelong passion! 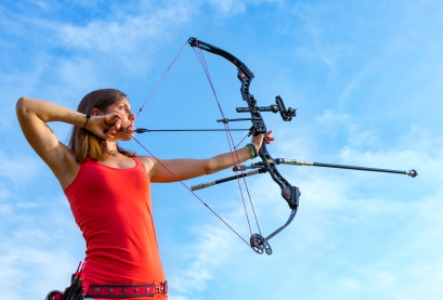 This summer, London is taking centre stage as it hosts the 2012 Summer Games. The best athletes in the world are competing in the name of their countries for a place on the winner’s podium, so why not let them be your inspiration and try one of these recognized Olympic sports for yourself!

For some, archery may be a solitary hobby, while for others it can be an intensely competitive sport! This ancient sport has a long history and first made its appearance as target archery during the Paris Olympics of 1900. For the everyday enthusiast, it’s a sport that can be played by all and promotes physical as well as mental strength. Plus it certainly hits the bull’s eye when it comes to social fun, as archery clubs can be found across Canada. Check out Archery Canada to find out more.

Fencing was part of the original lineup of events featured in the first modern Olympics, which was held in 1896 in Athens, and it continues to be part of the games today. The head-to-head action of fencing is more than just a sport of duelling swords; it’s an art form with great benefits! The quick pace and intense footwork give a person a physical workout, while the required element of strategic thinking offers a mental workout as well. Click on Canadian Fencing Federation to check out fencing programs in your area.

Table tennis (or Ping-Pong) is much more than just a basement or recreation room activity, as it joined the ranks as an Olympic sport in Seoul at the 1988 Summer Games. This game will help improve hand-eye coordination, reflexes and, depending on the intensity of play, can even be considered an aerobic activity. People of all ages and abilities can play and have fun. Check out Table Tennis Canada for information on provincial table tennis associations.

This Korean martial art is a relative newcomer to the Olympic scene, having been an official sport only since the 2000 Sydney games. In addition to its self-defence aspect, tae kwon do is a great way to increase physical coordination and improve mental powers. As this popular sport is practiced by millions of people virtually worldwide, it’s generally quite accessible, and there are many studios across Canada to choose from.

Water polo was the very first summer games team sport and has been in the games since the Paris Olympics of 1900. It could be described as a combination of swimming and ball sport, as two teams hit the water to attempt to score on each other’s nets. It’s a fast-paced game that builds up endurance, burns calories and promotes teamwork — not to mention it’s fun! To find out more about water polo, click on Water Polo Canada.