If you’ve never heard of vaginal atrophy, you’re not alone. It’s not something that’s commonly discussed, but it’s a condition women need to know about. 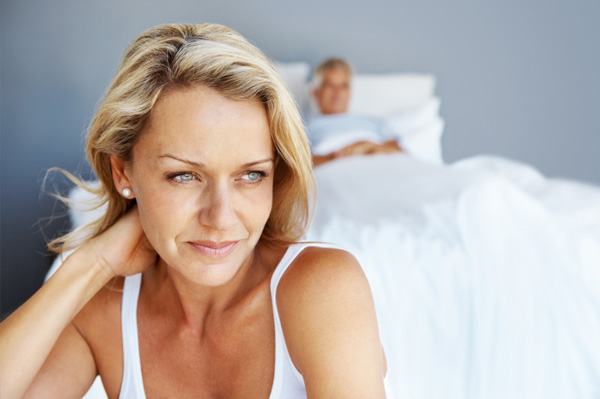 It’s interesting how much erectile dysfunction is discussed and how much awareness there is about the condition, but when it comes to a chronic condition that can affect a woman’s sexual intimacy after menopause, many of us are in the dark. The condition we’re talking about is vaginal atrophy.

What is vaginal atrophy?

After estrogen loss (which occurs after menopause), the vaginal walls can become thin, fragile and inflamed. Because of this change, you may experience a number of symptoms, including a burning sensation, itchiness, dryness, irritation of the vaginal area, a watery discharge, painful sexual intercourse, light bleeding after intercourse, an urgent need to urinate, urinary incontinence and frequent urinary tract infections. Symptoms vary from woman to woman, says Dr. Rosella Nappi.

A recent survey titled “Vaginal Health: Insights, Views and Attitudes” was very telling when it comes to this chronic condition. It shows that women are not asking their doctors about treatments when they experience vaginal atrophy symptoms. In fact, one in five women would rather try to treat herself before seeing her doctor about her symptoms. In addition, most doctors don’t ask women about their vaginal health.

Even more eye-opening are the number of women suffering from vaginal atrophy in silence. Eighty-two per cent of post-menopausal women in Canada said the condition negatively impacts various aspects of their lives: 50 per cent believe it causes problems for their sexual partner, while 30 per cent feel it affects their quality of life. It’s important to remember that we now live for many years after hitting menopause compared to decades ago, notes Dr. Nappi. But the good news is that treatments for this chronic condition are available.

Despite the fact that more than four out of 10 women believe nothing can be done to help with vaginal changes, effective treatments for vaginal atrophy do exist on the market, such as topical estrogen creams and lotions. According to Dr. Nappi, while these may be effective, some women may find them messy, and we want a sense of feeling clean. A less messy product is a capsule that’s inserted into the vagina. One bonus of such a low-dose estrogen treatment is that it stays local and doesn’t enter the bloodstream.

What’s key, though, is that women talk about what they’re experiencing and see their doctors for advice and treatment sooner than later. Left untreated, vaginal atrophy will worsen over time.

4 Heart-health tips for women
Women’s folic acid needs
Are your shoes bad for your health?