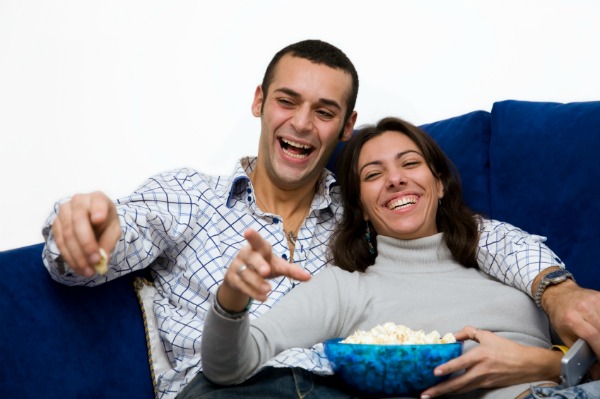 There’s a reason the ladies of Bridesmaids were asked to present at the Academy Awards — they are universally hilarious. The film revolves around the outrageously funny trials of a group of bridesmaids, a maid of honor and a bride as they get ready for the big day. It combines the perfect quantities of witty banter, crass humour and light romance to keep men and women captivated for the entire movie. Though you and your man may be laughing at different moments and for different reasons, there is no doubt you both will find a whole lot to love about this one.

It’s a little bit sexy, a little bit romance and a whole lot of comedy. In this 2005 film, two best friends — played by Owen Wilson and Vince Vaughn — get their kicks by crashing the weddings of people they don’t know. As in any good romantic comedy, one of the gentlemen falls for a certain lady, and hilarious antics ensue. There are also some surprising guest appearances that men and women alike are sure to enjoy.

Ellen Page and Michael Cera shine in this hilarious comedy that won Diablo Cody an Academy Award for best screenplay. The film centres on an off-beat high school kid who suddenly discovers she is pregnant and has to deal with the issue. Its dry humour and honest quality make it a rare gem.

Nothing describes a movie made equally for men and women quite like Jerry Maguire. You take legendary stud Tom Cruise and place him in a movie about sports, and you have all the ingredients necessary for a movie that speaks to everyone. It’s cute, it’s inspiring, a little bit romantic and a whole lot of fun.

This one has it all — fast-paced heist scenes for the guys and a bevy of attractive men for the ladies. In a remake of the 1960s classic, Danny Ocean, played by George Clooney, wrangles together a group of eleven criminals to simultaneously rob three Las Vegas casinos. Handsome hunks Brad Pitt and Matt Damon come along for the ride, and a feminine touch is added in the form of Julia Roberts. It’s action-packed, funny and sure to please.

19 hrs ago
by Tarah Chieffi