Every relationship is going to encounter its share of ups and downs. The real challenge lies in learning the best ways to talk to your man and work through your conflicts together. Here, we break down the dos and don’ts of broaching hot topics so you can get your worries out in the open, and both of you can be happy with the outcome. 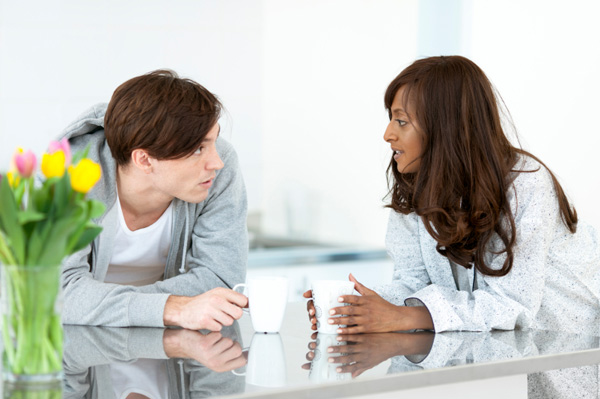 Do pick your moments

Wrestling with problems on your own can be exhausting, and it’s natural to want to vocalize them the second you see him. But if your guy has just gotten home from a particularly gruelling day at work or has a long line of chores to accomplish around the house, he won’t be in the best mind-set to deal with the new problem you’re presenting. Vocalizing issues at the wrong time could lead to an unnecessary fight and possibly cause the problem to never get resolved. Don’t rush things. Be patient, and bring the topic up when you are both in the best possible state of mind.

Wherever possible, let the problem stay constrained to the issue itself. Avoid using blame, as this will put him on the defensive. Instead of using “you” statements such as “you said this” and “you did that,” rely on terms like “I feel this happened” and “I’ve noticed that.” This will help him see you aren’t attacking him, but simply trying to work through some things that are getting under your skin.

Do stay on topic

Discussing one issue might bring up thoughts of another. For example, choosing to confront your man about his clutter might remind you of the collection of useless decorations his mother keeps giving you as gifts. You may want to deal with that issue simltaneously, but avoid that urge. Bringing up too many issues at once can quickly cause him to feel overwhelmed, and you might not manage to get anything solved at all.

Do give equal amounts of praise and correction

Avoid becoming blinded by the issue so much that he starts to feel discouraged. For every criticism you make, pair it with an honest compliment. For example, “I really appreciate that you do the dishes after dinner, but it would be even more helpful if you would take the time to dry them, as they tend to collect water when left that way.” It might seem childish, but it can go a long way towards helping him take your criticisms into account.

If you have decided to broach a topic, it obviously carries some emotional weight with it. The subject might make you angry, sad, frustrated or hurt. As hard as it may be, try to keep those emotions in check. Discussing the issue objectively becomes next to impossible when either of you lets your feelings take over. Try to remain as neutral as possible so you can really talk things through.

When you broach a topic with your man, it has to be a dialogue, not a statement. Give him a chance to explain his feelings and actions. Take his side into account. Have a true conversation so you can both be comfortable with the resolution.

21 hrs ago
by Tarah Chieffi