Relationships often fall into different, but equally exciting, stages. Sometimes, you’re ready to move on to the next one but you aren’t quite sure how to get your man to take the plunge with you. If you’re ready for him to pop the question, then follow these simple dos and don’ts to helps him find his way. 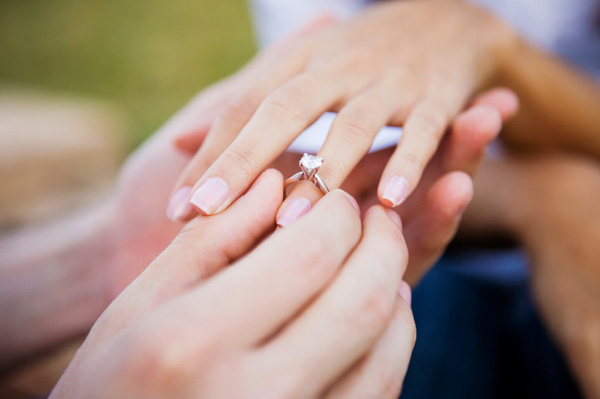 Let’s face it, the biggest worry your man is dealing with as he gets ready to propose is whether or not you’ll say yes. This doesn’t mean you should be constantly rattling his ear off about when the proposal is coming. Instead, gently nudge him in the right direction by assuring him of your love for him and how much you enjoy your time together. By subtly insinuating that he’s the man you want to spend your life with, you’ll warm him up to the idea without scaring him off.

If you’ve been good about telling your man how safe and in love you feel around him, then sit tight. If you want to ensure that he feels confident in the proposal and ensuing engagement, you have to give him time. If you constantly poke and prod him about when it’s coming he might rush into it before he has had time to acknowledge his readiness. If he comes to the decision in his own time, he’ll feel a lasting confidence in it.

Don’t let others put pressure on him

This is a decision he has to come to on his own. Other people trying to influence him will likely only make matters worse. If you’re feeling frustrated about the delay in the proposal, it’s natural that you want to vent your frustrations to your friends and family. But just make sure that you only reveal your true feelings to those you can trust to keep their mouths closed. Having your mom or a close friend making winking comments at him will make him feel uncomfortable and might even cause him to shut down. Instead of venting to your nearest and dearest, explain why you’re upset, but also try to see where he’s coming from. It’s important to talk things through so you don’t feel alone, but make sure your confidante knows that it is something you need to deal with as a couple. Ultimately, this is a decision about you and your man, so, for the most part, try to keep it to the two of you.

Sure, you might have always envisioned your engagement taking place at a romantic bed and breakfast, surrounded by candles and softly falling snow — but he doesn’t have to know that. Constantly referring to the dreamy proposal your best friend experienced or the rumours you heard about how Patrick Dempsey popped the question will only confuse and frustrate him. He’ll become so nervous about getting it done just the way you want that he won’t know what to do with himself. Remember, no matter how the proposal goes down, at the end of it you’ll be one step closer to wedded bliss, and that’s what counts. So let him come up with his own unique and special way of doing it: because, whatever he decides to do is representative of the person he is — and that’s why you love him so darn much!