SheKnows Editorial, Charlotte Andersen
September 2, 2014 at 8:00am AM EDT
Share

It’s inevitable. You can’t hide; they will find you. If it hasn’t happened already, in the near future someone will ask you to dump a bucket of ice water over your head. But is this really the best way to save lives?

Related story These Are the Best Exercises to Improve Heart Health

It’s all in the name of good fun and it’s to raise awareness and money for ALS, a deadly neurological disorder with no known cure. We’re helping save lives and that’s always a good thing. But while every life is worthwhile, a new infographic shows that if you’re looking to get the most life-saving potential out of your money then you might want to skip the ice water. 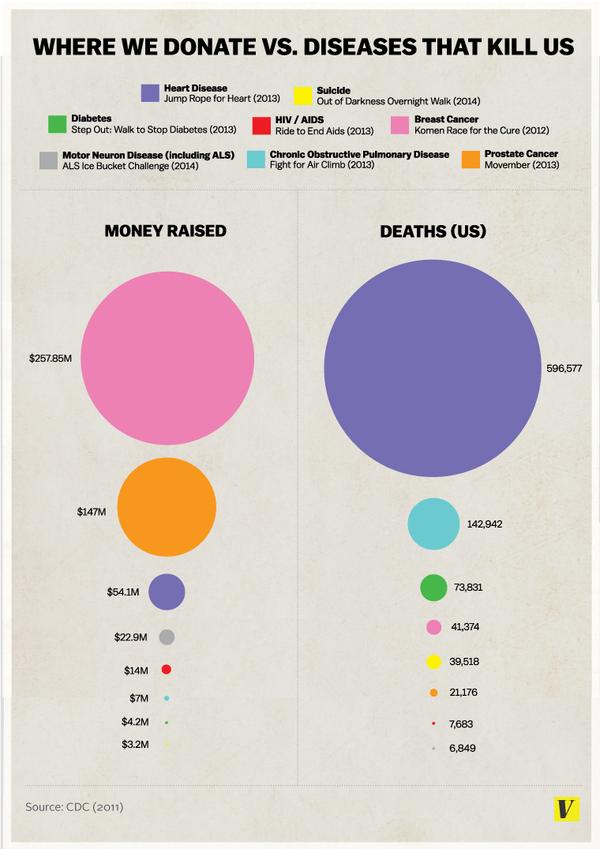 Last year, according to the CDC, ALS killed 6,849 people. A significant and heartbreaking amount to be sure, but it’s not even a drop in the bucket compared to the nearly 600,000 who died of heart disease during the same time. It turns out that even though an astounding amount of money has been raised for ALS, it doesn’t even crack the top 10 of killer diseases. The number one “honor” goes to heart disease with cancer (lung cancer being the most lethal), chronic obstructive pulmonary disease, stroke and accidents rounding out the big five.

All those illnesses are decidedly unsexy — when’s the last time you saw a T-shirt for COPD or a walk-a-thon for stroke victims? Which is why, despite killing more Americans than the rest of the top 20 combined, they are some of the least-funded when it comes to research, treatment and awareness. The problem, says William MacAskill, founder 80,000 Hours, is that we often give out of emotion (or public shaming in the case of the Ice Bucket Challenge) instead of looking at where the greatest need is.

“Showing respect or affection toward a loved one who passed away, for example, is an admirable way to donate. But it’s not the same as thinking about the impact of your investment,” he said to Vox. “People can get upset when you say some causes are more effective than others. That’s not true, because it’s as tragic for someone to die of ALS as it is for someone to die of malaria. But wanting to respect and honor a particular tragedy is different from trying to help as many people as you can.”

All of which isn’t to say we shouldn’t donate, it simply means we should be thoughtful givers. That the Ice Bucket Challenge got so many people to open their wallets (and hearts) is amazing and beautiful but now we need to keep that momentum going for other people in need. This may mean checking out sites like Charity Watch and GiveWell first. It may also mean looking farther from home. MacAskill points out that donating money to developing world health charities will reach at least 100 times as many people than developed world health causes.

In the end people understandably want to donate to something they have a personal connection to — something the Ice Bucket Challenge did wonderfully — which is why we need to work on expanding our circle of those we care about. Oh and it’s not a bad idea to chuck the junk food and brush up on the warning signs of a heart attack in the meantime.