There’s love… and then there’s this romantic man who knows that the shortest path to a woman’s heart is lined with savory hot dogs.

Let’s set the scene: 2011. Thailand. Bakery that sells hot dogs. That’s where a 28-year-old Chinese man, surnamed Wang, first set his eyes on the woman of his dreams. They discovered that they lived in the same city and true love soon blossomed. 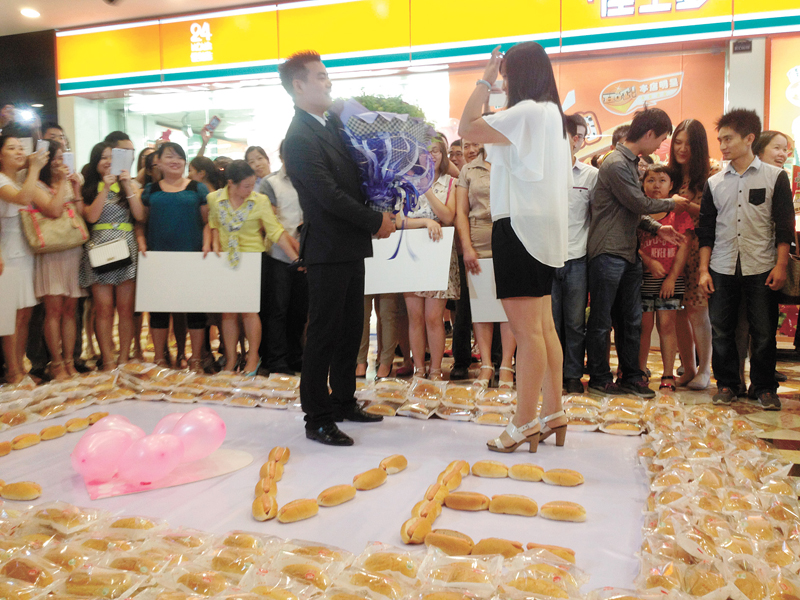 Fast forward three years. The duo is still going strong, so Wang enlisted the help of a local hot dog eatery to supply 1,001 hot dogs for his elaborate proposal — each representing one day in their 1,001-day relationship. According to the Chengdu Evening News, Wang popped the big question by presenting his love with the smorgasbord of frankfurters — some even lined up to spell “LOVE.”

Did she say yes? Of course! We wouldn’t believe in love anymore if she turned that down. No word yet on the plan for their wedding ceremony, but we’re hoping hot dogs are at least a part of the scene. Think of all the possibilities! Dachshunds (known as wiener dogs) could serve as their bridal party. Hot dog-themed wedding dress. Buffet that only consists of footlong franks with all the toppings. Those little hot dog-shaped gummy things as party favors.The possibilities are endless… and judging from the proposal, these two won’t disappoint.

More on weddings and proposals