Meet Cassandra Blackwel. The 19-year-old woman is getting over her ex quite nicely, thanks to a little help from Queen B, Beyoncé.

Is there anything Beyoncé can’t do? Nope. She’s even helping this newly-single Toronto lady get over her last relationship.

Blackwel enlisted the help of Blue Ivy’s mom by Photoshopping her head on pics of what’s-his-name, otherwise known as her ex.

“Breakups suck. You know what makes them easier? Reimagining your happiest times together with none other than Queen B,” she writes on her Tumblr, Beyoncify My Boyfriend. 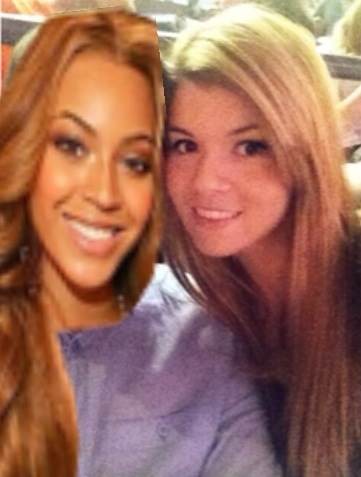 The duo has had quite the time together in the past few days, judging from the photos. They’ve been snapped on the subway, the beach, in front of the Christmas tree. They even got in a few selfies while relaxing together on the couch. We like to imagine that Beyoncé is giving her some flawless advice.

Basically, this is brilliant. Why spend hours cropping your BF out of your 9,000 pictures together when you could just add Bey? And no, Blackwel isn’t a Photoshop master, but who cares?

“I’m not trying to properly cover him, I’m just slapping him with Beyoncé and people are really responding to that,” she told Buzzfeed. “It’s an ode to how much effort I put into the relationship, if you will.”

Blackwel is also a humanitarian: She’s volunteering to Beyoncify anyone else’s pics. All you have to do is send them to her. We have some work for you, girl.