The 2014 FIFA World Cup starts today in Brazil, with millions of soccer fans tuning in for coverage around the world. Surprisingly, though, the World Cup does more than boost TV ratings: It causes both soccer players and fans to adapt their sexual behaviors.

Normally, sex toy purchases are split 50/50 between men and women throughout the year, but not so prior to a major sporting event. According to data mined by sex toy company Lelo, purchases of female sex toys by male buyers skyrocket in the days leading up to a large sporting event. In fact, the number of purchases by male buyers increases to 72 percent of all sales prior to a large competition, including the World Cup. 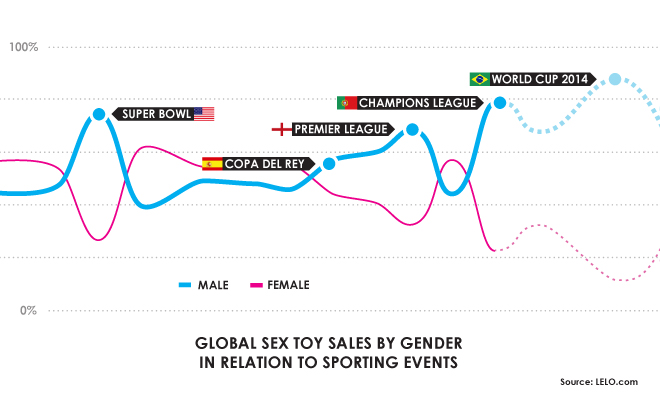 So what’s going on, here? Looks like men want to provide their ladies with a way to self-satisfy when they’re otherwise engaged in the important task of yelling at the TV.

Although numbers are exceedingly difficult to compile, anecdotal evidence suggests that the sex trade booms during worldwide sporting events. Some of the sex workers are consensual participants and some are undoubtedly victims of sex trafficking. Notably, the largest increase in sex workers is the consensual variety. According to Al Jazeera news, many prostitutes are aware of the money that is available at large sporting events, so they cross national lines to earn big bucks while they can.

Women are more likely to be sexually assaulted

I’d be remiss if I didn’t point out that women face increased danger during the World Cup and other large sporting events. A report by Durham University and Trust for London suggests that women are at increased risk of sexual violence during large sporting events for several reasons, including increased alcohol consumption, rioting and revelry before and after games, mob violence, an influx of tourists and strain on law enforcement.

Contrary to popular belief, sexual activity doesn’t drain the masculine juices from athletes. In fact, several studies suggest that sexy time actually increases testosterone in male athletes, thus making them better competitors on the field. The result, of course, is hundreds of professional soccer athletes looking for sexual partners during their month-long stay in Brazil. This is why the athletes’ lodgings are known as hotbeds for sexual activity. For the love of the game, y’all.

What do you get when you bring millions of people together for sport, alcoholic beverages and generalized revelry? Venereal disease, yay. The flip side of lowered sexual inhibition is all too often the spread of disease, so public health officials routinely launch World Cup campaigns that increase awareness of disease and even provide free condoms to fans for safer sex. In fact, research from the last World Cup in South Africa found that 99 percent of sex workers used a condom during the games.

There’s even an official World Cup condom this year, that’s modeled after a Brazilian uniform. Hot or not?