As cleanses become more and more popular, kids are getting in on the trend — but is it safe for growing bodies? 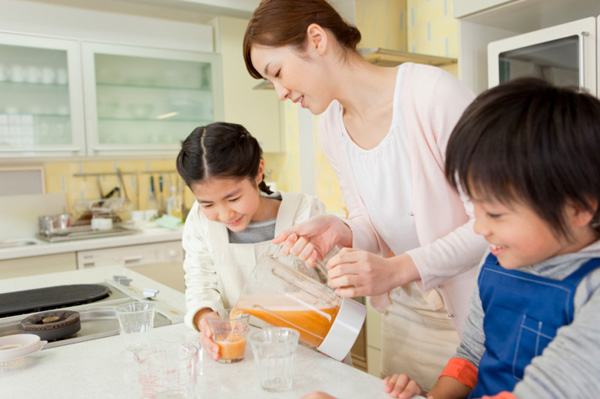 In light of their “conscious uncoupling,” US Weekly reported that Chris Martin was fed up with Gwyneth Paltrow “taking her children’s diet to the extreme.” Apparently, Paltrow and Martin fought over what the kids could and couldn’t eat. She pushed macrobiotic foods and juice cleanses while “he thought they should just be kids and have ice cream every once in a while.” But is it really cruel and unusual punishment to put your kids on a juice cleanse?

Juice cleansing is becoming an all-American pastime. You know something has really arrived when you can buy it, in bulk, at Costco. So of course I bought the shrink-wrapped set of giant bottles of organic fresh-pressed juice when I saw them last year. I learned two things from my three-day juice cleanse: First, I like to chew my food. Drinking all my calories was incredibly unsatisfying; juice goes down way better with food. Second, while I love a good exercise in deprivation as much as the next gal, it wasn’t the health revolution I hoped it would be. But I’m a grown-up and if I want to spend all day with a grumbly tummy, then my suffering is my own prerogative. Kids are a different story.

A New York Post article profiles four young juice-cleanse devotees: a 6-year-old, a 13-year-old, a 17-year-old and an 18-year-old. According to their mothers, the girls (because of course they are all girls) wanted to try the juices they saw their mothers and other family members using. In the case of the first grader, she simply thought the colors were pretty and thinks the juices are tasty and her mom makes sure she eats solid food too. But the older three girls, one a high-school athlete, are doing the cleanse 100 percent, with one reportedly losing 15 pounds in 10 days.

“Prom is coming up and it’s the best time to try it. I wanted to fit into a smaller dress, and see if I was able to see a difference in my body,” says the 18-year-old. “I’m doing another one again in a couple of days. I want to lose more.”

If reading that made you uneasy, you’re not the only one. Even as the kid-cleansing industry is growing rapidly — Dherbs.com, a California-based company that sells “Children’s Cleanse liquid extracts” for $99, reports an increase of almost 50 percent over the last few years — more and more experts are becoming concerned.

First, experts caution it may start an unhealthy relationship with food. Marisol Gonzalez, M.D., a specialist in adolescent medicine in Summit, New Jersey, told the Post the trend is “distressing,” adding that awareness of cleanses at a very young age could lead to eating disorder behaviors.

Second, nutritionists point out that juices (unlike smoothies that use the entire fruit or vegetable) lack essential nutrition that growing kids need. Over 60 percent of an apple’s fiber, along with the majority of vitamins, is concentrated in the peel so juicing a fruit can markedly lower the nutritional value. Indeed, a quick glance at the nutritional panel on the popular cleanse I tried shows all the juices to be high in sugar and low in fiber and protein. No wonder they went right through me (literally).

“The [kids are] quoting Dr. Oz to me,” says Gonzalez. “[But] unless you’re doing [a medical procedure such [as] a colonic [or a] colonoscopy, kids need to eat. She adds that with all the concern about childhood obesity parents often come from a good place, wanting their kids to lose a few pounds and “eat healthy” but the body needs a certain number of calories for your heart to beat. “If [you cleanse] before puberty, you can delay growth,” she says.

Lastly, this stuff ain’t cheap. Even my Costco bargain juices were pricey. One of the mothers of the profiled teens reports that the five-day $600 intensive program she and her 17-year-old daughter are doing together costs double what she would usually pay for groceries for her family of four. Indeed, the primary complaint the 6-year-old’s mom has about her daughter drinking her cleanse juices is that they’re so expensive.

But enough of what the experts say — would you let your child try a juice cleanse?

Cold and flu season by the numbers
Surprise! Your child isn’t autistic after all
5 Reasons your child is hungry all the time