Take heed of the drama unfolding between two large tech companies. The extremely popular dating site OKCupid — which boasts 2 million users and a bazillion questionable crotch shots each month — has blocked users of the web browser Mozilla Firefox from accessing its site. 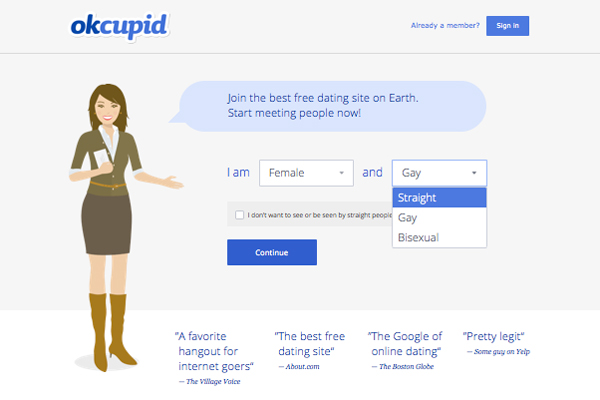 Last week, Mozilla hired a new CEO named Brendan Eich. Eich is a known opponent of gay marriage, and his position offends the sensibilities of OKCupid execs. Christian Rudder, co-founder of OKCupid, said in a conversation with Gizmodo, “It’s not like we’re trying to make political statements left or right. Marriage and people’s treatment of marriage is core to our business.”

Users who come to the site using Firefox are greeted with a message that encourages them to switch to another web browser. Rudder estimates that this block will divert 12 percent of OKCupid’s users from the site, which translates into a substantial hit to the company’s bottom line.

When pressed, however, Rudder is unable to provide a clear answer for what he hopes to accomplish by blocking Firefox users from the OKCupid site. Rudder stated to Gizmodo that he doesn’t want Eich to be fired, and he and other OKCupid execs don’t have an ideal resolution in mind. Apparently, OKCupid reached the decision to block Firefox users in under 36 hours of preparation, and they did so because their goal, according to Rudder, was “to raise awareness,” and because “it just seemed like the right thing to do.”

Mozilla, meanwhile, reported that it was taken aback by OKCupid’s move, and was not afforded an opportunity to provide a response prior to the block. Furthermore, Mozilla executives clearly state that the company is for marriage equality, regardless of its CEO’s belief system.

There are a couple of questions in play here. First, are the personal beliefs of a company’s CEO fair game for a business boycott? What will OKCupid’s move actually contribute to the gay rights movement? And finally, should a company that supports equal rights be punished financially for the personal beliefs of its employees — even if the employee in question is the CEO?

14 hrs ago
by Morgan Mandriota