The new dating app BroApp has been causing a stir around the internet as of late, and for good reason. Described as the “clever relationship wingman,” the app lets ‘bros’ compose a text or choose from pre-programmed texts (don’t overexert yourself now, fellas), and then choose a time and a date for it to be sent to his lady.

Related story These Low-Key Date Ideas Totally Take the Pressure off Valentine's Day
While the app got some negative feedback, I can kinda see the draw. I dated a trader last year. Because of the manic pace of his job and the wild ups and downs, he couldn’t afford to be on his phone most of the time. But if I got little check-ins throughout the day, hellos and thinking of yous, I would probably take the bait. He was thinking of me at the point of writing it, wasn’t he?

Rumor has it, BroApp has been so well-received that “the masses” are requesting that a “SisterApp” be created. First of all, we have got to come up with a cooler name than SisterApp. LadyApp? ChickApp? Almost anything is better than SisterApp.

But what, pray tell, should our ChickApp do? Exactly the opposite of the BroApp. 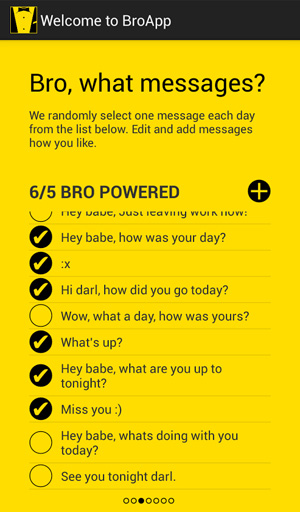 ChickApp senses if a text to my boyfriend includes a photo of food, giving me a warning message of, “He doesn’t care or need to know what you had for lunch, even if it looks yummy!”

After midnight, ChickApp requires a breathalyzer in order to text. If I try accessing it more than three times it automatically calls Uber for me.

If I’ve texted my guy and it’s been under an hour without a response from my him, ChickApp won’t let me text, “Um, HELLO?” and instead will send me a sweet quote about how patience is a virtue and demand that I go do something I love. Or, automatically dial my BFF.

Even further, if I exceed a preset number of messages in a set time frame to my guy, ChickApp will block his number with the warning, “I think you’ve said enough.”

If the relationship is under six months, ChickApp will lock down all emojis that contain hearts.

BroApp, meet the wonderful world of ChickApp. Let us know when we can download it.

An evening with sex toys
Is there anything more awkward than a first kiss?
What Gwyneth Paltrow’s divorce implies about the future of marriage

18 hrs ago
by Haylie Pomroy

23 hrs ago
by Lindsey Lanquist