Admit it, even the boldest of girls can find their first sex shop visit to be a little mortifying… and totally memorable whether you go with your significant other or a group of your best girlfriends. 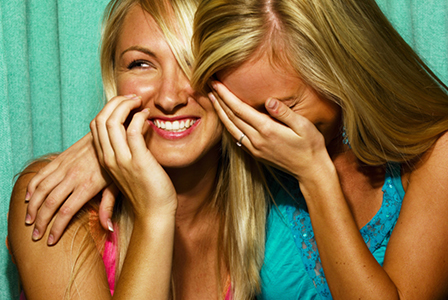 Pre- and post-sex rituals to practice >>

Inspiration on the third floor

When Lori Perkins was in her twenties she “visited a very private sex shop on the third floor of an office building in midtown New York. I was looking for some woman-directed porn. The women running the place were in their 50s and very welcoming — sort of ‘sex nuns,’ if you will. But the shop was far from naughty.” The self-described feminist, who runs her own publishing company, says that erotica plays a big role in her life today. She says, “I have taken large groups of romance writers to sex stores, done erotica readings and even hosted sex toy ‘Tupperware parties’ for chapters of Romance Writers of America.”

“Bianca” says, “The first time I visited an adult store, it was part of a first date [when I was 25]. I had told him in a previous conversation that I had never been to one so after our dinner at a comedy club, he surprised me by pulling up at a nearby store. I was a little embarrassed but very curious. The highlight had to be when a woman who was shopping with her daughter saw us looking at whips and lightly thwacked me with one to show how it could be used. I have to say [it was the] most memorable first date ever.”

More on sexual health and fun

LaPronda, a single mother, entrepreneur and “pleasure seeker of all things that are yummy, delicious, fun and adventurous” in Charlotte, North Carolina, says, “Condom lollipops, edible panties, lubricants, games and replicas of the male genitalia lined the shelves at a quaint sex shop located in Atlanta, Georgia. This was new, forbidden, exciting [and] yet confusing for a 28-year-old goodie-two-shoes raised in a deeply religious family. Yet here I was exploring new options in the world of sex, love and intimacy. I have always been fascinated by sex but this took my interest to a whole different level. Today, I relish that secret introduction to what is now a well-rounded life of sexual intrigue, mystery, fun and adventure.”