During football or baseball season, it may not seem like your guy cares at all for you. However, if you tell him you’re buying a battery-operated boyfriend, he might feel differently.

Related story Watch Teen Mom's Maci Bookout Teach Her 12-Year-Old Son About Sex, So He Won't End Up Like Her 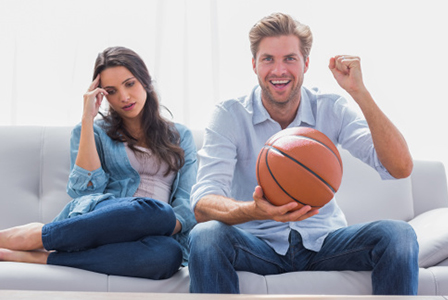 Am I doing it wrong?

“No way. I just thought it’d be fun to add something new. If you ask nicely, I’ll let you use it on me.”

Will it replace me?

Poor guy. He loves you just as much as you love him and the last thing he wants is for B.O.B. (Battery-operated boyfriend) to take his place. Time to set his mind at ease.
Suggested responses:

“Just consider it your back-up on game nights.”

Uhhh… where are you, ya know, putting it?

This could be another way of asking if it will replace them. Or they could just be curious. The right answer is probably the truth… or a good defensive strategy.
Suggested responses:

“Did you have a suggestion?”

“Well, it says, ‘External use only.’ But, if you take my car and put gas in it, clean the bathroom, take me to Cheesecake Factory for dinner, remember (and then buy) my favorite flowers and spend all evening telling me how beautiful I am… I may let you make the final decision.”

Boys are so curious. We’re not sure there’s a wrong answer to this. They just want to get inside your mind, the same way you want inside theirs.
Suggested responses:

“Maybe. Wanna help me find a good one?”

“Maybe. How would you feel about that?” (This is sure to shut them up. You know they hate talking about feelings.)

“I don’t know. Maybe. I may not be as sexy about it as the chick from the video.”

“You know, I really think some things should remain private.”

The most important thing to remember about these conversations is that boys have fragile egos. You may be completely okay with what he does in the shower every morning, but the idea of his girl getting it on with an inanimate object may be worrisome. Put his mind at ease by reminding him that no battery is powerful enough to replace his big strong arms. Seriously. He’ll eat that s*** up.

What is tantric sex?
Self-lovin’ sex positions
The sex moves he will always remember