A new test has the possibility to be the primary screening tool for colon cancer and it’s not invasive like a colonoscopy. 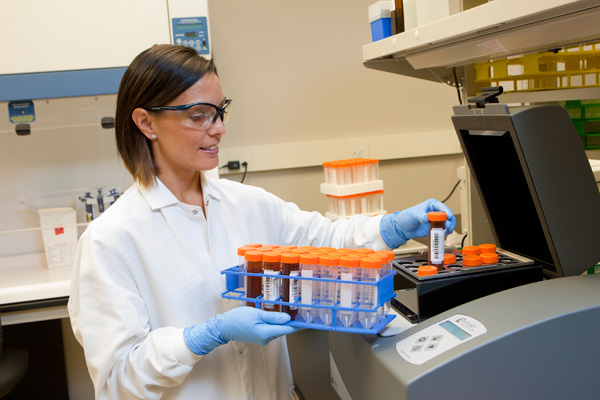 At-home stool testing for colon cancer is nothing new, but a new at-home test called Exact Sciences’ Cologuard test shows promise as an initial colon cancer screening tool. Unless the result is positive, physicians likely would not recommend an invasive colonoscopy.

According to a study published in The New England Journal of Medicine, the new at-home test can detect both occult blood and abnormal DNA shed by polyps and cancers. After testing about 10,000 people who took the Cologuard test and the traditional fecal immunochemical test (FIT), Cologuard detected 92 percent of colorectal cancer in patients, while FIT only spotted 74 percent of cancers. The test also found 42 percent of advanced pre-cancerous lesions in patients, while FIT only found 24 percent.

Steven Itzkowitz, M.D., a study author and professor of medicine at the Icahn School of Medicine at Mount Sinai, said that Cologuard boosts the ability to detect lesions, adding that the Cologuard isn’t a genetic test in a traditional sense.

Cologuard, while not yet approved by the U.S. Food and Drug Administration, could be used as an initial screening tool, and also used as an in-between monitoring tool for high-risk patients between their regular colonoscopies.

Dr. Madappa Kundranda, a colorectal cancer expert and medical oncologist at Cancer Treatment Centers of America, said the test as it is does not replace colonoscopies.

“Colonoscopy is still the gold standard,” he said. Patients could still have a positive stool test with Cologuard and have a negative colonoscopy. “This type of test is still in its infancy, and we need to iron the kinks out.”

Don’t expect to find Cologuard in the drugstores just yet.

“This is a very expensive test and until the above technical issue is resolved, this may not be ready for primetime,” Kundranda said.

There is significant potential to increase the sensitivity and specificity of these tests, as new techniques are developed, Kundranda said.

“Someday, this may replace colonoscopies, but we are not there yet,” he added.

Colonoscopies have helped to cut the rate of colon cancers by 30 percent over the past decade in people over age 50, he noted. Colon cancer death rates are down about 3 percent a year in the last decade. Work still needs to be done in order to get that number as close to zero as possible, Kundranda said.

“I certainly hope that convenient at-home testing can help do that,” he said. “It has the opportunity to target the at-risk population that cannot or will not get colonoscopies.”

Aspirin linked to lower colon cancer risk in women
Colon cancer receives a social media buttlift
Energy healing: What it is and how it can fix you