These days, it seems everybody loves kale. Consider this your warning: too much kale can be a bad thing. 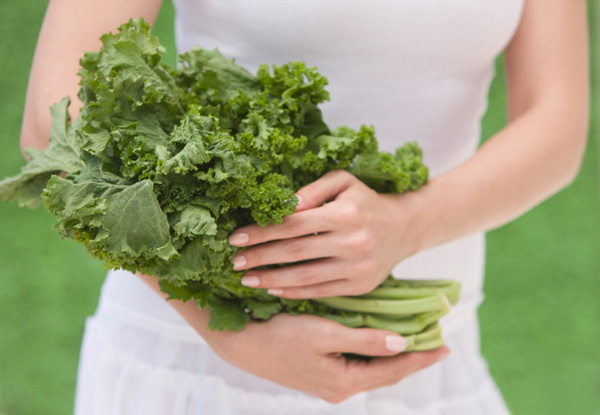 From kale salads and kale stews to kale smoothies and kale chips, kale is the darling vegetable du jour and taking center stage on our plates. Restaurants have taken note, too. According to a recent report by Technomic, a food research industry firm, there has been a 400 percent increase in kale items appearing on restaurant menus since 2008.

But… is it possible to get too much of a good-for-you food like kale?

Take my colleague Amanda Cook, a fellow Health Coach and creator of Vintage Amanda. In 2012, Cook went from never having eaten kale in her life, to eating it (mostly raw) almost daily, sometimes twice in a day! After six months of eating kale as her primary green, Cook began to experience dysfunctional symptoms: excessive hair shedding and hair thinning, feeling cold all the time and slow digestion.

Another three months went by. When Cook finally saw a doctor, he checked her thyroid and discovered that her TSH (thyroid stimulating hormone) was off the charts.

On lab tests, the official “normal” range for TSH is between 0.5-3.0, but according to Dr. Sara Gottfried, author of The Hormone Cure, the “optimal” range — where your thyroid functions best — is between 0.3-2.5. Cook’s TSH was 80 and far from an optimal functioning thyroid. She clearly had hypothyroidism (an underactive thyroid or low thyroid), which in addition to consuming large quantities of raw kale had been exacerbated by high levels of chronic stress.

Cook’s “too much kale” story is not an unfamiliar one. I’ve heard similar stories from other women. For instance, a former editor of mine used to snack on raw kale morning, noon and night until she experienced the same symptoms as Cook.

Now, there is no denying kale’s rightful superfood status.

This dark leafy, cruciferous green — a member of the Brassica family — is chock full of antioxidants as well as anti-inflammatory and anti-cancer nutrients (in the form of sulfur-containing compounds known as glucosinolates). It is a rich source of fiber, minerals (manganese, copper, calcium, potassium and magnesium) and vitamins (B1, B2, B3, B6, folate and E). Even more, kale is an exceptional source of vitamins A, C and K, essential for blood clotting and bone health.

It can be easy to feel virtuous about eating it by the bushel.

How eating too much raw kale can affect your thyroid

According to the Linus Pauling Institute, animals fed a diet high in cruciferous vegetables, such as cabbage and turnips, have ended up with hypothyroidism. In one human case report, an 88-year-old woman developed severe hypothyroidism — and coma — after eating roughly 2 to 3 pounds of raw bok choy every day for several months.

Goitrogens are naturally occurring substances found in foods such as soybeans, millet, peanuts, pine nuts, strawberries, and in many cruciferous vegetables, including cabbage, broccoli, Brussels sprouts, collards, turnips and kale. Goitrogens can reduce thyroid function through compounds that trigger antibodies that cross-react with the thyroid gland, or by interfering with iodine uptake by the thyroid gland. In both cases, the thyroid is unable to produce sufficient hormones needed to regulate metabolism. Low thyroid function often leads to weight gain and cold sensitivity (feeling cold all the time when others are perfectly comfortable).

In a recent study, researchers who assessed the role of dietary iodine and cruciferous vegetables in thyroid cancer among women living in New Caledonia reported an increased incidence of thyroid cancer among women who had both iodine deficiency and consumed large amounts of cruciferous vegetables. Iodine deficiency is a primary cause for hypothyroidism throughout the world. But don’t start supplementing with iodine just yet. Be aware: too much iodine intake, as well as too little iodine intake, can impair your thyroid function.

That said… cruciferous vegetables have many health benefits. Just be sure to cook them, which renders most goitrogens inactive (except with soy and millet).

Even if you have low thyroid, there’s no need to completely avoid goitrogenic foods, like kale. I have low thyroid and I eat plenty of kale, broccoli, cauliflower and other cruciferous vegetables — but only cooked.