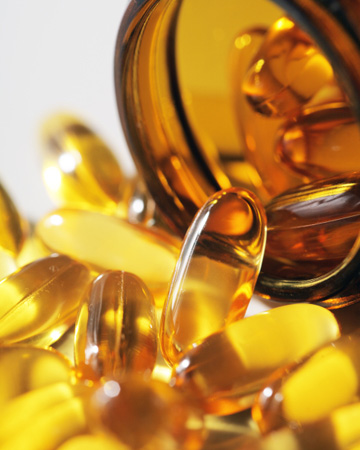 They were thrilled to discover that high doses of fish oil wound up making the difference.

Omega-3 fatty acids in a nutshell

Did you know there are three different types of omega-3 fatty acids? They are known as ALA, DHA and EPA. ALA is typically found in plant sources like flax seed and berry oils, while DHA and EPA are found in marine sources like fish and krill oils. “Fatty acids are nutritional components the body needs to sustain normal biological processes, including metabolism and the production of other key biochemicals and structures,” explains Denny Kwock, CEO and president of Daily Wellness Company. “Examples include brain development and efficient fat burning.” He notes that these nutrients are considered essential because they must be provided by our diets.

Benefits of omega-3 fatty acids reach far beyond a nutritional need. “Taking omega-3 is one of the best natural ways of managing and maintaining healthy triglyceride levels, of which high levels are linked to cardiovascular disease,” Kwock says. “Also, studies indicate that omega-3s can help reduce general inflammation which is linked to a myriad of health problems. For example, there are some studies that show benefits in rheumatoid arthritis.” He says that there are many other benefits, such as omega-3s can help improve brain function and even improve mental disorders.

Approximately 30 percent of our brain’s structure is omega-3s, so it makes sense that if you administer high doses to an individual who has suffered from a brain injury, it could help in ways conventional medicine may not. Kwock says that current medical treatment of brain injuries involves supportive measures, like reducing swelling and letting the body work on healing the brain. “The idea is that if there is an injury, having more ‘building blocks’ available can aid in helping the body naturally recover from the injury,” he clarifies.

While several high-profile cases have shown excellent results, Kwock mentions that more research needs to be done to see if similar therapy would be useful in other cases. “For certain, this is an area of research that is very promising and points to the profound and sometimes dramatic impact nutrition has on our body,” he explains. “Interestingly, it was Hippocrates, the namesake of the oath that modern physicians are bound by, that said, ‘Let food be thy medicine and medicine be thy food.'”

Being an advocate for your family member

The parents in the CNN story about the injured teenager highlight the steps they had to take to try high doses of fish oil in his treatment regimen. First, they were told to let their son die, then they were told to “wait and see.” They had heard about fish oil treatment for brain injuries and effectively had to sneak it in. Then, they fibbed and told the long-term care facility that he was already on a high dose.

Kwock believes that doctors have responsibilities to their patients that many of us often don’t realize. “Doctors are highly-trained professionals that are there to help,” he tells us. “Their rigorous training is science- and evidence-based. They are also bound by the Hippocratic oath, an ethical code that begins with, ‘First, do no harm’ that is reinforced by laws and regulations dictating the types of treatments they can prescribe.”

Advocating for a loved one, though, is definitely an option. You might find that your physician is open to ideas that you have. “If efforts fail, don’t be afraid to seek a second opinion,” Kwock shares. “Again, it’s important to understand any objections or concerns that might be raised but still be proactive in finding solutions or treatments you think might help. There are no absolute sure things when dealing with a medical crises.”

Fish oil supplementation is an excellent idea for the population in general, and may be useful in cases of traumatic brain injury. The more we learn about the healing properties of naturally-occurring substances, the better off we are, and adding omega-3s to our diet is definitely worthwhile.

23 hrs ago
by Sara Dobie Bauer