When a friend invited me to a sex toy party, I thought, “Well, sex toys aren’t really my thing, but free wine, tasty food and cheap laughs are.” So I went. There are few occasions in my life when I have laughed harder. Join me for a smart a** recap of an evening with sex toys. 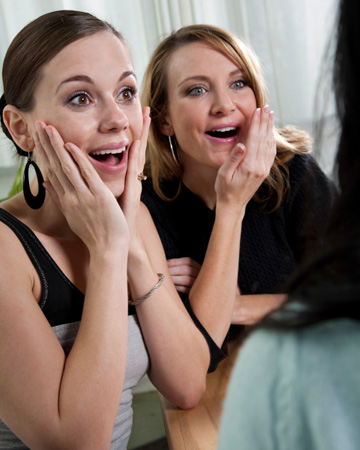 Although I had heard of home show parties for sex toys, I assumed they would be attended by only a few brave women who valued free booze and food more than their pride (like me). I could not have been more wrong. Women from every corner of my friend’s circle gathered in a high-end home. The women were married, single, professional, tall, short, skinny, chubby, fashionable, tomboys and there were about 30 of them foaming at the mouth to see our host’s collection.

Speaking of our host, she’d remind you of the mom who sells brownies for the PTA once a month. She was on the short side, a bit rotund and had what I describe as “cowgirl” hair (permed with straight bangs — no disrespect to cowgirls, of course). The point is, I wasn’t getting sex kitten from her. She’s not the kind of woman you’d pick out of a crowd and think, “I bet she knows her way around a bedroom.” Thus, my first stereotype of the evening was completely dismantled.

“I’ve got this — thanks for showing up.”

Having been married for over 20 years, I have a firm grasp of the fragility of the male ego. It’s astounding how many women ignore this male truth (myself included sometimes). We don’t understand it, but it has a formidable presence in any relationship. I kept thinking about the husbands of these women walking down the stairs, horrified at their wives’ fascination with the objects of their desire. Sure, some guys (we have to assume lazy ones) think it’s cool when their women want to experiment with sexual devices, but there isn’t a clearer way to send the message, “You’re not doing it right. I’ve got this — but thanks for showing up.”

Now for the phallic symbols themselves. I had, in all my adult years, never seen anything like it. (As you may have gathered by now, sex toys aren’t my thing. It’s just way too much work and one more thing I have to buy batteries for.) They came in hundreds of shapes, sizes and colors. Some of them were so magnificent, they reminded me of something I’d win at the fair if I caught enough fish with the magnet tied to the end of my pole. They were beautiful. They lit up and changed colors. I considered buying a couple for my Christmas tree, but I thought that might get a little awkward when Grandma came over.

Our diva of desire saved the best for last. She passed around this 8-inch rubber feat of engineering that illuminated in every color of the rainbow, had ball bearings and vibrated at different intervals. I was so impressed with it, I leaned over my friend and introduced myself. I asked it what it did for a living and if it lived around here.

Honestly, with all the drama and bulls*** that comes with dating, why would you ever date again if you bought one of those things? I’m already used to taking out my own trash and in the years since I’ve been divorced I’ve learned how to use a power drill. If I paid over $100 for that gadget, I’d never leave my house again. I’d never date again. I’m guessing at the end of a long day, that piece of machinery isn’t going to ask me what’s for dinner. It’s not going to hog the remote all night. It’s not going to fart in bed. On second thought, perhaps I have dismissed the merit of such devices much too readily.

The moment I knew it was time to start dating again
Text messages: Hidden clues about his personality
Can men and women really be friends?