Alcohol is a common excuse for bad behavior, but when it comes to sexual aggression, a new study shows that it has nothing to do with how many drinks a man has had. 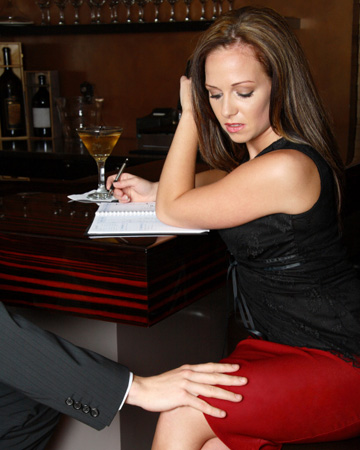 We’ve all blamed stupid decisions on being under the influence — in fact, it’s what leads some people to stop drinking.

And when it comes to males, what better excuse for inappropriate behavior toward the ladies than a few too many drinks? Sure, it’s easy to say that you insisted on talking to a woman even though she wasn’t interested because you’d had one too many. But according to new research, that argument doesn’t hold.

According to a new study published in Alcoholism: Clinical & Experimental Research, alcohol actually doesn’t affect males’ behavior the way we might think it does. Turns out, drinking isn’t blurring the lines and making men confused about what’s inappropriate — if they’re going to make a sexually aggressive advance, they’re going to do it with or without alcohol.

To perform the study, researchers catalogued 260 “aggressive incidents” — think breast grabbing and inappropriate comments about women’s bodies. While the study involved men and women, it’s skewed toward this type of male behavior because it found that “ninety percent of incidents involved male initiators and female targets, with almost all incidents involving intentional or probably intentional aggression.”

Even more telling about the study is this conclusion: “Initiators’ level of invasiveness was related to intoxication of the targets, but not their own intoxication, suggesting intoxicated women were being targeted.”

That means that men weren’t confused about right and wrong when they were drinking. Instead, they were seeking out the women who were visibly more intoxicated.

Does that mean that all men are just on the prowl for drunk women that they can take advantage of? Certainly not (or at least, I hope not), but the findings are telling in a culture where we’re quick to blame the victim and not the aggressor. And if we don’t blame the victim, then we simply blame alcohol instead of the aggressor. “Oh, he was just drunk,” is a common phrase, and one that we should stop using. Sexual aggression should never be OK or accepted, in any situation. In fact, in most cases when an aggressive action was taking place, no one else intervened. Not the guys’ friends, and not the staff.

Part of making women feel safer in a bar environment then is about empowering other people to intervene in aggressive situations. If you see someone in a situation that is clearly making them uncomfortable, say something!

As the authors of the study concluded, “Sexual aggression is a major problem in bars often reflecting intentional sexual invasiveness and unwanted persistence rather than misperceptions in sexual advances. Prevention needs to focus on addressing masculinity norms of male patrons and staff who support sexual aggression and better management of the highly sexualized and sexist environments of most bars.”

Let’s stop blaming alcohol for bad decisions and start dealing with the problems instead.