Pancreatic Cancer Action’s “I wish I had breast cancer” ad campaign has infuriated many people. Emotions aside, though, the campaign did exactly what it was meant to do by bringing a flood of attention to one of the deadliest cancers in the world. 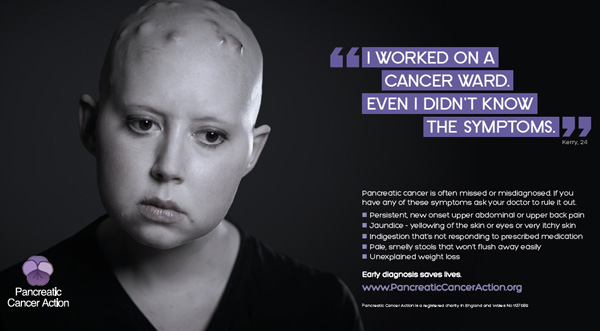 In my time as a social worker on the oncology floor of a large hospital, I was asked to care for individuals and families in the midst of suffering, life and death. All diagnoses, I learned, are grave and frightening for a patient who hears a doctor utter the dreaded words, “You have cancer.”

That said, some cancer diagnoses are undoubtedly worse than others. Each type of cancer has its own survival rate and treatment options, which influence whether the patient has a good or poor prognosis. This is why — despite the media’s labels of “repugnant,” “stunning,” “terrible,” and “wrong-headed,” — I find myself fervently agreeing with Pancreatic Cancer Action‘s divisive “I wish I had breast cancer” ad campaign.

Many media outlets, cancer organizations and patients themselves have taken issue with the campaign’s use of “cancer envy” as its thesis. The campaign features pancreatic cancer patients stating that they wish they’d been diagnosed with other forms of cancer that carry a better prognosis. These statements have been called insensitive and divisive.

But here’s the thing: Even if these candid remarks are insensitive, they have some serious merit. Consider the following facts:

While all cancer diagnoses are serious, more common cancers, like breast or even lung cancer, simply have a better overall prognosis than pancreatic cancer. By leveraging a controversial ad campaign, Pancreatic Action Center has brought long-overdue attention to one of the deadliest diseases out there.

Like it or not, awareness is the name of the game when it comes to cancer treatment and prognosis. You can’t fault an organization with a key goal of “awareness” for generating exactly that. So why did the Pancreatic Action Center feel the need to bring awareness to the disease?

You can’t fault Pancreatic Cancer Action for using a compelling and controversial ad to increase visibility of the disease. The Huffington Post reported that traffic to the organization’s website increased 200 percent following the campaign, and those visitors were met with information about pancreatic cancer symptoms. While it’s unfortunate that people felt riled by the ads, it appears that the organization did its job by providing important information about a deadly disease to a mostly-uneducated public.

10 Most common cancers in the U.S.
Headbands of Hope
Skin cancer: 5 Warning signs

13 hrs ago
by Laura Williams