When your boyfriend does something douchey, what do you do? Do you a) rip him a new one and demand respect in an “or else” kind of way, or b) draw the line and move on? 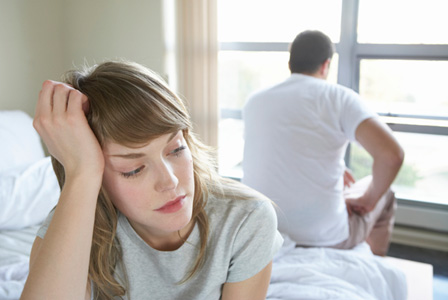 If you’re struggling to choose, it’s because your gut is telling you to choose invisible option c) move the line. Here’s the 411 on why so many fiercely independent women fall into this trap (and you know, how to stop).

It’s a phenomenon that never ceases to amaze me: You’re in a sort-of relationship with this guy and all of the red flags are there, screaming you shouldn’t be with him, yet you bulldoze your way into a committed relationship with him (at least, committed to you). He wrongs you in small, subtle ways that individually don’t add up to much — but after you’re together long enough and you look back, you want to perform the most epic face palm ever.

I’ve lost count of how many times I’ve done this. When I’m single, I’m all “men-shmen,” and then I meet a guy and find myself looking for an exorcist to remove the June Cleaver that’s taken over my body. (Dignity? Heard of it.) So why do so many of us shut our eyes to what’s really going on?

“It’s common for people in new relationships to not state what they’re really hoping for, for fear if they say what they really need the relationship will end,” says Carol Anne Austin, psychotherapist at Kimberly Moffit and Associates. For example, you might say you’re OK with your “friends with benefits” arrangement, when you eventually do want a committed relationship. “I think it’s tempting to ‘go with the flow’ and be agreeable to the other person’s needs and secretly hope he’ll change his mind and eventually commit,” she says.

To that I say, womp womp. Sure, he does douchey things — but you’re basing his behavior on your own one-sided expectations that he never agreed to in the first place. If he did agree and you’re making excuses for him, that’s even worse. Either way you’re leading yourself on, and the longer you stay the more you’ll lose.

Here are just some of the ridiculous scenarios you might find yourself in:

The “I’m not looking for a commitment” commitment

First of all, seriously? We’re still doing this? Sigh. “Be honest with yourself that you did (and do) want a committed, monogamous relationship,” says relationship expert April Masini.

The “Relationship baggage in tow” commitment

He has kids and still keeps in touch with his baby momma? Pffft, no biggie… you know, until he’s talking to her constantly because their 15-year-old’s getting into s*** at school and you’re the perpetual third (actually, make that fourth) wheel.

The “Money’s no object” commitment

He’s an amazing guy, and it’s only money… until you’re the one who’s always footing the bill. What’s worse, you actually feel guilty for getting mad that he’s not pulling his own weight because he treats you so well. Here’s the thing though: If he’s not paying his own way, he’s not treating you well. Period.

The “I’m committed to breaking up” commitment

You don’t want him, but you do. (What does that even mean?!) Your on-again-off-again relationship becomes this obsessively addictive tilt-a-whirl where you get off just long enough to throw up and buy more tickets.

The “He has so much potential” commitment

Change starts and ends with you, not him. “If you’re not honest with yourself, you’re going to make a mess of your life,” says Masini. “People tend to lead themselves on because it’s often painful to look in the mirror and see themselves, flaws and all — but it’s an important component for healthy relationships.”

Consider one relationship where you lead yourself on to be a rite of passage — anything past that, and you and I need to start a support group.