Is your guy just not getting it together? Before sitting him down for the breakup talk, you might want to consider sticking around. He could have more long-term potential than a dude in a sharp suit who runs marathons. You just haven’t seen it yet. 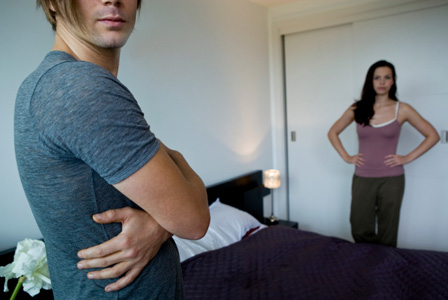 Maybe your guy is so disorganized he can barely find his socks in the morning — or he doesn’t have a 9-to-5 job… by choice. You could still have a winner on your hands.

“If you’re using the ‘slacker’ word, chances are you’re feeling threatened by some part of his personality that is unlike your personality,” says dating coach Lindsay Chrisler.

That said, there are charming, mellow guys who will eventually drain the joy out of your life — and your bank account. How can you tell whether a guy is lazy or just a late bloomer? Like this:

Stay with your “slacker” boyfriend if

He’s not working in an office, but he does work.

Sleeping in, running errands during the day or taking a long lunch aren’t necessarily red flags anymore. “The more globalized our economy becomes, the more people are working from home or doing specialized work that lets them have a lot of flexibility in their schedules,” says Marni Battista, founder of Dating with Dignity. If the paychecks keep rolling in, the hours he keeps might not matter much.

Most of the annoying things he does can be eased with communication.

If he’s laid back and you’re a taskmaster, that doesn’t mean you two are destined for disaster. “Every behavior has to be looked at through the lens of people being human,” Chrisler says. “Consider the value this person brings to your life. If it’s a lot of value, find a way to work with the behaviors that make you think he’s a ‘slacker.’ Often, he just won’t care as much about certain things in the same way you do, and he’s not doing anything to intentionally anger you.”

He has big dreams — but you think he has a shot at them.

Lofty goals can reap major rewards… if you’re on board for sticking it out with him. Follow Battista’s rules of thumb whether to bail on a man without a traditional gig:

“Before dismissing a guy without a 9 to 5 job, ask yourself four questions: Can he cover his own expenses? Does he love the work he does? Is he proactive about chasing those dreams? Do you support his career goals or think they’re legitimate/achievable?”

If so, you might be dating the next successful tech entrepreneur, indie band frontman, chef or screenwriter. Hey, you never know.

“A 25-year-old guy could be considered a ‘slacker’ simply because he’s not 100 percent in the relationship and has other priorities like his buddies and his job or career,” says matchmaker April Beyer. “This changes as men get older.”

You’re forced to do all the un-fun things because he’s not responsible. Ever.

“You know it’s time to say goodbye when you are doing all of the heavy lifting in the relationship, such as making the plans, paying for dates, reminding him of important dates and events that are meaningful to you,” Beyer says. “Listen to your instincts! Great relationships require the participation of both parties. Otherwise, you’re simply playing one-man tennis.”

You’re bankrolling his lifestyle, and there’s no sign of that changing.

“If he forgoes keeping up his rent payments because he’s chasing his dream, he may not be grounded in the reality of how achievable his dream is,” Battista says. “And that’s especially true if he treats you like an ATM or just assumes you’ll pull out the pocketbook every time there’s a payment to be made.”

5 Stupidest things to fight over
Is it love, or are you just lonely?
5 Bad guy traits you shouldn’t overlook