Looking back on the last three guys I dated, I could have saved myself a lot of time and trouble by paying closer attention to their dogs. 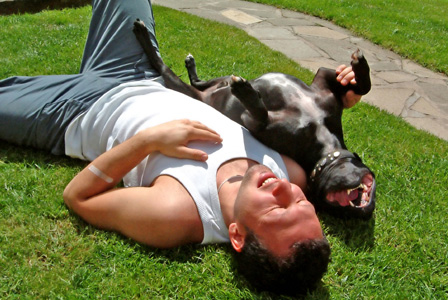 When I first started dating Frank, he seemed like a really decent guy and he was a genius with a barbecue grill, so I gave him a shot. As I have had to learn to do with most of the men I’ve dated, I had to give his dog a chance too.

You know how one minute you’re in a happy and fulfilling marriage and the next you find out that your husband of 20 years has been cheating on you with someone 10 years younger? Well, I do. I went from country club wife and mother of high school students to a single, 39-year-old “cougar.” In this weekly feature, I will share with you all the mind-boggling, head-scratching, is-this-someone’s-idea-of-a-joke moments from my so-called single life. Consider this your private invitation to my tremendous learning curve…

I typically date tall men because I’m 5′ 10″ and I feel like the woman in Attack of the 50 Foot Woman if I date someone shorter than I am. A male friend told me I was being a snob and to give short guys a chance. Frank was short. And round. And bald. I figured that would shut my friend up.

Frank’s dog, Magnum, was short and round also. He was really cute and very affectionate. I didn’t have a hard time pretending I liked Magnum, as I had done with other guys’ dogs.

As the months passed, I started to figure out that Frank had major Mommy issues. I had already breastfed two children and at this point in my life, was not in the mood to breastfeed another woman’s 47-year-old child.

Frank got irritated with me once because I didn’t say goodbye before I left, even though he was sound asleep. He probably wanted me to tuck him in, read him a book and sing him a lullaby before I left too.

Over time Frank revealed himself to be needy, clingy and in need of constant reassurance which became increasingly annoying.

While Frank was wearing thin on my nerves, my affection for Magnum started to wane too. I noticed that like Frank, Magnum was perfectly happy to lie around the house all day sleeping. Magnum was also neurotic (lazy and neurotic — interesting combination, don’t you think?). Magnum was so distraught when Frank left during the day that he would dig his way under the fence to escape and actually leapt through two screen windows to chase after Frank. One day when I got out of the shower and opened the bathroom door, I almost fell over Magnum who was staring at the door waiting for me to come out. It seemed Magnum had codependency issues as well.

In retrospect, I could have figured out Frank a lot faster if I had been paying closer attention to Magnum. I had another boyfriend who spoiled his dog (and his kids) rotten, and I had another boyfriend who treated his dog like a trophy in public but like crap behind closed doors (which is exactly how he treated me). Heed my advice ladies — pay close attention to the personality trait of a guy’s dog and then ask yourself where he may have picked those traits up.

My brilliant solution to date better men
My ex-husband’s mistress is a drunk: Why I still didn’t win
I think my crush might be gay

9 hrs ago
by Michele Borboa MS

13 hrs ago
by Lindsey Lanquist