Learning how to give a better blow job isn’t as arduous as it sounds. By stealing a few simple blow job tips from a BJ queen, you can give the best head he’s ever had in under five minutes. (Hint: Practicing on a cucumber could help.)

Blow by Blow is a SoCal-based company that throws parties for women who want to improve their BJ technique — it’s popular with bachelorette parties in particular. Attendees practice on cucumbers carved to look like penises (tip and everything). “They’re very wet and slippery,” says Blow by Blow founder Sasha. “As soon as you put them in your mouth, honestly it’s like that vegetable was made for that. We are very particular about the ones we pick — they have to be pretty firm.” (Fun fact: The best ones come from Sprouts and Trader Joe’s.)

Sasha created the company after men raved about her skills in college — not only right after the fact but later on too, to friends of her friends. As she started to hear positive feedback through the grapevine, she began teaching blow job tips girls in her dorm room. Blow by Blow took shape from there. 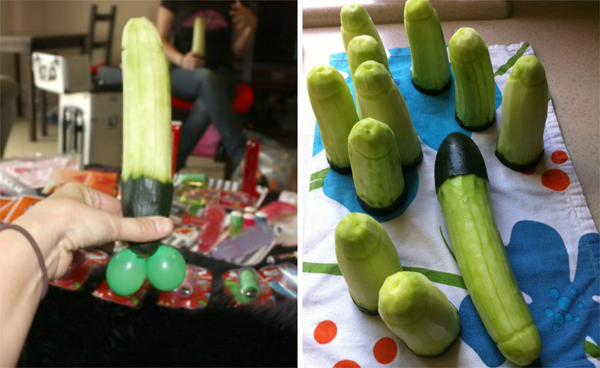 Here are a few BJ tips Sasha swears by that’ll make your man dizzy with pleasure — and earn you the title of Bona Fide Sex Goddess (emphasis on the “bone”):

Even better: Initiate it without him having to ask for it. He’ll think he’s died and gone to sex heaven.

Start with foreplay to avoid a sore jaw

Using big bobbing-and-sucking moves on the shaft right from the get-go will tire you out too soon. Instead, gently take his balls in your mouth (called “teabagging”) for two minutes before starting to bob and suck. “Teabagging is huge for increasing arousal,” Sasha says. “If you can increase his arousal before you even start bobbing, you’re going to get him to climax a whole lot sooner.”

For even more variety before the actual blow job, alternate teabagging with massaging his perineum (the area between the balls and the anus).

Aim for “medium” suction at first

Start with “a nice medium suction — maybe even a notch up from medium — and then increase from there every once in a while to see if that gets an extra moan or an ‘Oh, yeah’ or an ‘Ouch!'” Sasha says.

“You also want a tongue blanketing/cupping the bottom of his penis to accompany your medium suction and medium speed bobbing,” Sasha says. “Also, it’s recommended to increase that bobbing speed when you can tell he’s about to ‘go,’ and I typically also increase the suction level a tad bit too.”

The shower is your friend

If your guy’s scent or hygiene bothers you — or you just can’t stand the taste of a blow job — hop in the shower with him, wash him yourself and give him a blowie right there. “If you’re not a swallower, you can spit it out so quickly and he won’t even know,” Sasha says.

You can also take it one step further: “If your guy is willing… if you stick it underneath in his perineum area, it’s the easiest access to male G spot without actually entering the anus,” Sasha says. “It’s a huge special feeling. It’s a little enhancer that’s just going to increase their pleasure even that much more.”

“A lot of girls give partial blow jobs that might be just kind of foreplay before sex, and they’re like, ‘Oh, yeah, I totally gave you a BJ the other night,'” Sasha says. “No, no, no, no. That doesn’t count… Stay committed and do it start to finish… not even with a hand job at the end.”