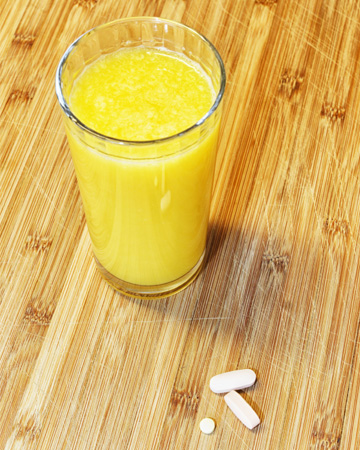 For any pharmaceutical to be effective, it must be absorbed and metabolized properly. Unfortunately, there are several drug-food combinations that slow, speed up or inhibit these mechanisms thus altering the drug’s effect. In addition, taking your medication at the appropriate time with respect to meals is also very important in ensuring a maximal therapeutic effect. Below we will discuss some of the most common interactions to be aware of, but make sure to review consequences of drug-food interactions with any medication you may be taking.

What is drug absorption? Simply put, it can be defined as the movement of a drug into the blood. If absorption is done at a slower than anticipated rate, it will take longer for the drug to take effect. In contrast, if the extent of absorption is reduced, the drug will never become as effective as intended.

A common example of a drug-food interaction that inhibits the extent of absorption is the combination of calcium-containing foods and tetracyclines, antibiotics typically used to treat urinary tract infections (UTIs). To ensure the antibacterial effects of the drug are reached and the UTI is treated, avoid milk, dark leafy greens and orange juice when on the medication.

Another interaction that reduces absorption, thus reducing its effectiveness, is when digoxin, used for cardiac disorders, is combined with sunflower seeds, rolled oats or wheat bran.

Certain combinations can also heighten the drug’s peak effects by enhancing absorption. For example, combining saquinavir, used for HIV infection, with a high-calorie meal will nearly double the drug’s absorption.

Metabolism determines the rate and intensity of a pharmaceutical’s therapeutic action. One of the most common foods that affect the metabolizing of several drugs is grapefruit juice. If taken with felodipine, used for hypertension, grapefruit juice will increase the drug’s blood levels to dangerously high amounts, which can increase the likelihood of adverse side affects.

There is some uncertainty as to whether grapefruit juice is good or bad in combination with other drugs. For example, the substance intensifies the effects of saquinavir and cyclosporine, which is likely beneficial. However, it can lead to toxicity with several other drugs. In general, it is best to avoid grapefruit juice if taking any drug that can be affected by it, including but not limited to amiodarone, carbamazepine, primozide and those mentioned previously.

There are several drug-food interactions that are proven to lead to toxicity, and thus should be avoided at all costs. Some antidepressants, such as monoamine oxidase inhibitors, and foods containing tyramine, such as aged cheese and yeast, can result in a serious rise in blood pressure that can sometimes be fatal. In addition, anyone taking theophylline, used to treat asthma, should avoid caffeine to prevent excessive excitation of the central nervous system. Other combinations to avoid include potassium-sparing diuretics and salt substitutes, as well as albumin-containing antacids and citrus drinks.

19 hrs ago
by Dr. Lexx Brown-James

24 hrs ago
by Lindsey Lanquist