Yoga is known to improve the mind, body and soul, but find out what happens when over-stretching takes its toll. 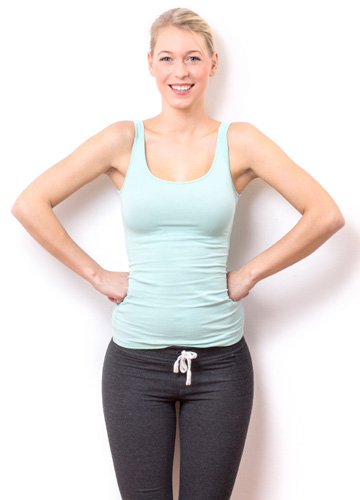 The practice of yoga comes along with many health benefits, including increased strength, flexibility and endurance, decreased tension, stiffness, pain and fatigue, as well as improved posture, memory and overall confidence, but is it possible to have too much of a good thing? Recent studies suggest so.

William J. Broad, author of The Science of Yoga, explains the correlation between yogis and injuries, especially hip-related ones, in a blog post on his website. He notes how he was unaware of just how many yoga instructors and students suffered from such injuries until the release of his book in February 2012, when yoga insiders wrote to tell him it was not uncommon for hip troubles to strike leaders in the community.

However, “the claims were impossible to verify,” he writes. In an effort to learn more about the supposed problem, Broad spoke with Michaelle Edwards, a popular yoga teacher in Hawaii, who said that dozens of students she knew, mostly women, were suffering groin pain and hip injuries.

“Edwards described how the elasticity of women becomes a liability when extreme bends resulted in chronic wear and tear on their hips,” Broad writes. “Over time, she said, the damage could develop into agonizing pain, and, in some cases, the need for hip repairs.”

Still puzzled by the contradiction of how a practice that is hailed for its power to heal can also be the source of the pain, Broad spoke with a few top doctors to get their take on the matter.

“If [yoga is] done without an understanding of the mechanical limitations of the joint, it can mean trouble,” says orthopedic surgeon Bryan T. Kelly in Broad’s article, adding that each year he operates on roughly 50 to 75 patients — mostly women — who danced or did yoga.

Broad told SheKnows that according to Swiss investigators, extreme leg motions can cause the hip bones to repeatedly strike each other, leading over time to damaged cartilage, inflammation, pain and crippling arthritis. They call this femoroacetabular impingement (FAI). “The name speaks to how the neck of the thigh bone (the femur) can swing so close to the hip socket (the acetabulum) that it repeatedly strikes the socket’s protruding rim,” Broad says.

So which yoga poses are responsible for causing such injuries? And how can we avoid them without jeopardizing our practice? The answer is simple — it’s all about balance.

Broad says the best way to avoid hip-related injuries during yoga is by “simply pulling back and not going so deeply into the poses,” and advises students to “do yoga in moderation and listen carefully to what your body is telling your about your practice.” Broad adds that the yoga poses that most commonly cause hip problems are seated forward bend (paschimottanasana), standing forward bend (uttanasana), forward lunge (anjaneyasana) and triangle pose (utthita trikonasana).

Learn how to properly practice these poses below 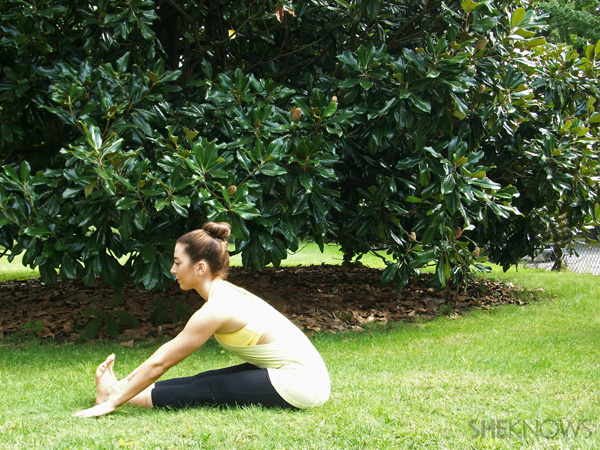 Sitting on your mat with your feet stretched out in front of you, reach your hands up toward the sky and begin to hinge forward at your hips, allowing your arms to drop toward the ground, reaching forward to your toes. 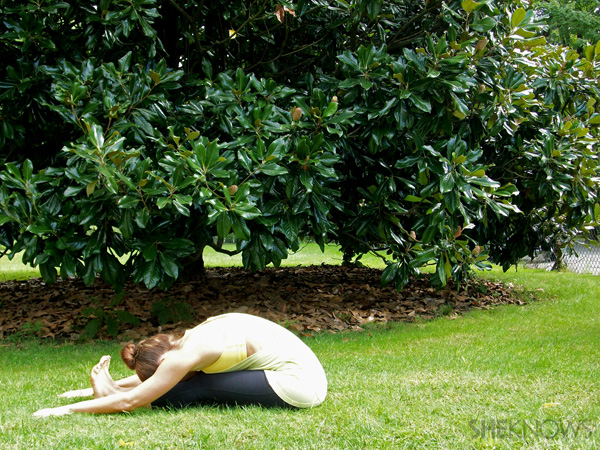 When you can’t reach any further, plant your palms and lower your forehead down toward your legs, with your nose toward your knees. 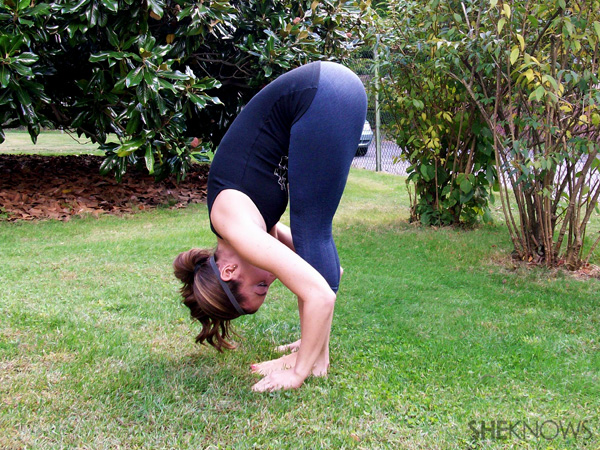 Standing straight up, feet together, arms by your side, reach your hands up and overhead into a prayer position and then swan-dive your arms and chest down toward the ground. Let your fingertips or palms fall to either side of your feet and slowly start to bring your chest in towards your knees. If you have a hard time reaching your toes, put a little more bend in your knees until your hands are on the floor. Keep pressing your chin and chest in towards your knees and thighs for the maximum stretch. Remember to never lock your knees and always keep a slight bend in them to avoid injury. 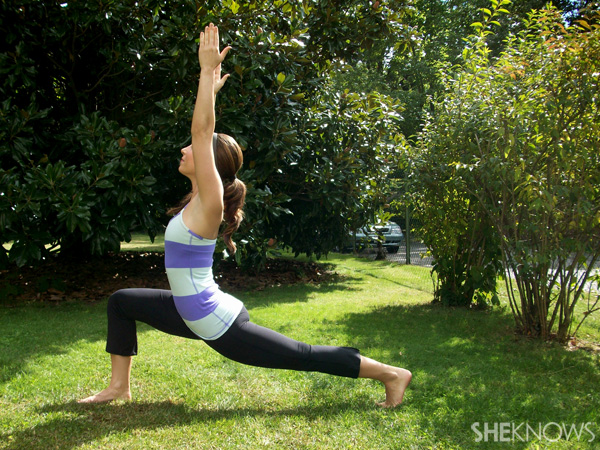 From downward facing dog, raise one foot up to the sky into downward dog split. Bend your knee and swing your leg through to the front of the mat. Once balanced, raise both hands up to the sky, coming into a high lunge position (you may choose to keep your hands on the floor during high lunge if raising them is too strenuous). 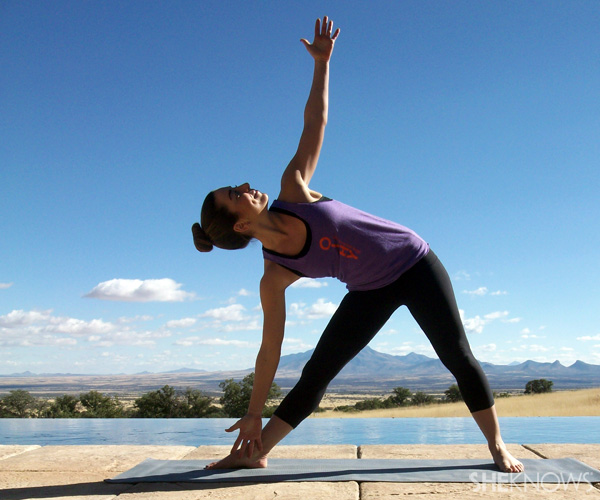 From warrior 2, keep your feet where they are and extend your front leg so that it’s nice and straight. Reach your front fingertips as far forward as they can go and when you can’t reach any further, slowly move them to come down to the ground, resting alongside your front ankle. Raise your back hand up toward the sky, following it with your gaze.