You’ll be able to buy Google Glass in 2014. How will a computer that constantly hovers in the corner of your eye change dating? Maybe for the worse, maybe for the better. A few theoretical pros and cons: 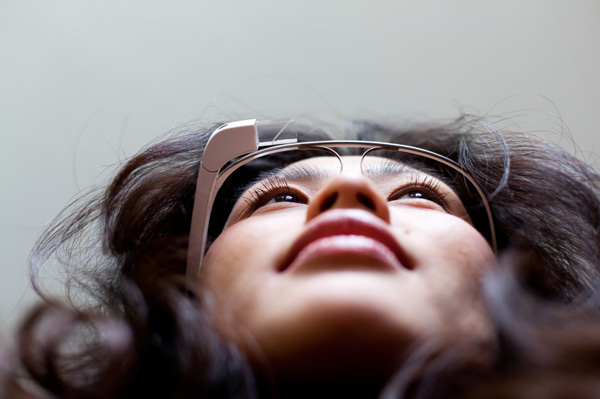 Why should your guy listen to your blow-by-blow account of how you finally stood up to Jan in accounting about her tardiness with your TPS reports when he can scroll through Twitter or watch Batman vs. Superman? You’ll never know what’s really going on behind those beautiful lenses if this tech works as well as Google wants us to think it does.

That said, how appealing would it be to watch Scandal while a boring dude drones on about his marketing job? So appealing!

After he snaps your assets, your date might just upload the photo to Twitter/Facebook/Instagram or text it to his friends. But that would probably kill his chances with his female social media followers, so that’s slightly comforting. Still, every command begins with the user saying “OK, Glass,” so that’s a major tell — unless the tech becomes more seamless and able to read your mind.

Live-streaming a date could become a thing

This would take a fair amount of work, but you could film the whole date and, while it’s happening, your girlfriends could weigh in on whether he’s a keeper. If you’ve had questionable judgment in the past (haven’t we all?), this feature could be a savior.

Does the cute guy at the bar have a criminal history? Has he been in Page Six for canoodling with models? Is he married but sans wedding ring? If the technology advances, Google Glass could tell you all of this and more via their Facebook accounts, Twitter feeds, Pinterest pages and other online data, as you scan the room. No career criminals, check: Thanks for covering that base for us, Glass.

Dishonest people will use it for evil, rather than good

If you think a guy is into you, you might be secretly flirting with a guy’s buddy, who’s feeding him lines through Glass. Creepy. (Though kind of unlikely — it would take a lot of coordination on the guys’ part to actually pull this off.) Similarly, someone who wants to get in your pants could use instantaneous data and find out what your interests are in order to seem like more of a pickup artist than he actually is. (One bar has already banned Glass.)

Then again, any guy could do this via the internet — like, on his smartphone while you’re in the bathroom. With Glass, it’ll just be in real time. People have been freaking out about this video, in which a dude uses tech-savvy eyewear to pick up a sexy bartender, but come on. If you’re gullible enough to let a high-rolling pool shark who dresses like an architect and stores his Ferrari in Midtown talk you into bed, the presence or absence of Glass probably isn’t going to make a difference either way.

You’ll both look like LeVar Burton
from Star Trek: The Next Generation

Glasses are hot (hello, Ryan Gosling in his Warby Parker specs), but Google Glass is a little… bizarre-looking. Trying to imagine what your date looks like without them might be difficult — and he may never take them off during daylight hours, depending on how attached to them he is. Sex with Glass on: That could be weird, especially if he’s sending what he sees to someone else. And if you both have them on, you could watch yourself having sex from his perspective. That could be hot… if you’re into watching yourself have sex.

City girls, you’re gonna love getting directions to a date without having to stop dead center in the street and look down at your iPhone. One of Glass’s features is transit directions — subway, bus and street cars — so you’ll get to the restaurant in time to gather your wits and take a deep breath before you breeze in the door right on time.

(Speaking of which, Glass can also remind you about restaurant reservations you’ve confirmed via your Gmail account, so you’ll never have to give up a hot table, even if you have to kick a guy to the curb beforehand and take your best friend instead.)

You’ll be able to plan a date on the fly

If the two of you get to a restaurant only to find out it’s closed, or if museum hours end earlier than you think, Glass will find nearby attractions for you to hang out at. I’ll also beam movie times into your line of vision if you spontaneously decide to see the latest Coen Brothers film (or make out to the dulcet tones of explosions during an action movie).

That’s a handy feature for hookups too: If you want to leave the bar together for a nightcap at a joint around the corner, Glass can guide you. Best. Wingwoman. Ever.

This love story between a Google Glass tester and her date happened even while she was wearing Glass… and writing about it. If they can work out, so can the rest of us — Glass or no Glass.

Tech in the bedroom: Dos and don’ts
How to take a safe, sexy pic for your man
“Crazy”-proof your online dating profile