We all have quirky habits, but none quirkier than our post-sex reactions. From laughing to crying to everything in between, intimacy is quite the bipolar roller coaster. 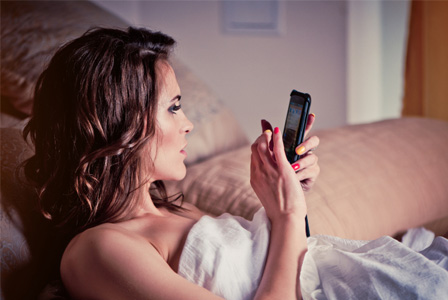 While it’s perfectly normal to be weird, what you do after sex is just as important as what you do during. Not to pull a Bradshaw, but I can’t help but wonder: Do your post-o habits freak out your sig-o?

Here are just some of the ways you could be insulting your beau without realizing it (or you know, encouraging him to Google “straitjackets for sale”):

Running to the washroom

Hygiene is good, but if you go to the bathroom to wash up the second it’s over you’re basically making him feel like he has cooties. Even if you make a shopping list in your head while you’re lying there, throw the guy a bone. He worked hard. (The same goes for ripping off the sheets to wash them… when he’s still lying on them. Not cool. At least wait until he’s in the shower and change them really, really fast.)

Putting your clothes on right away

While you’re only doing so because you’re shivering or you have roommates, you might be giving off the impression that you’re uncomfortable with your body, with intimacy or worse: With him. Leave a reasonable amount of time between climax and clothing.

Both laughing and crying are your body’s way of relieving stored tension — and being that women aren’t as passive as guys, you’re not just releasing tension from the sex itself, but anything that’s been bothering you since your last hookup. It doesn’t mean your relationship’s in trouble — and as long as you make him aware of this fact, the sucking-it-up part is all on him.

“Men don’t really always fall asleep first!” says Carol Anne Austin, M.A., M.Ed., CCC, sex educator and psychotherapist at Kimberly Moffit and Associates. “Contrary to the wide-held belief, studies have shown there’s no marked gender differences in which partner falls asleep first.” However, they did find that the partner who stays awake longer post-sex is more likely to desire more bonding behaviors from their partner than they received — so at the very least, fall asleep while snuggling.

Seriously, what’s more tempting than checking your phone for the whopping one message you may have received during the dirty deed? However… “Using your phone directly after sex can be disruptive to the bonding behaviors such as cuddling and the development of intimacy,” says Austin. Nix the urge by leaving all tech in the other room.

“There are folks who like to score the O,” says relationship expert April Masini. Much like an Olympic judge, they’re all, “How was it for you?” and after offering too many critical details about the experience, they can’t handle taking what they dish out. At all. Don’t be that girl. You know the second he’s one word off from the review you want to receive, it’s off to the couch for him.

Wanting to be alone

For every woman who’s struck by the cuddle bug, there’s another who wants to get the eff away from her guy, stat. Let’s face it — sex is intense, especially for fiercely independent women who feel like they’ve let their guard down. Sometimes you feel like you’ve given too much of yourself and being alone helps you counteract that feeling. Make sure he knows it’s nothing personal, and try not to bolt the minute you’re done. It’s better to be honest than have your reaction come out in the form of a fight later.

“The needy relationship saboteur immediately mistakes sex for commitment and starts having keys made for him, drawers cleared and a wedding registry started,” says Masini. “There’s no quicker way to get rid of a good lover than mistaking sex for commitment.” In other words, if the O is amazing, don’t propose immediately afterward — otherwise, you might never have one as amazing again.

While you might not think your habits are that big a deal, it’s important to keep the lines of communication open in case. When you’re not at the receiving end of your unintentional doucheyness, it’s impossible for you to see how your actions are impacting him. Make sure you’re easy to turn to when the time comes, because trust me — you’re going to want him to return the favor one day (probably within the next hour).

Get to know your Big O

A lesson on orgasms
Prepping yourself for orgasm: 4 Steps
The practice of orgasmic meditation for couples